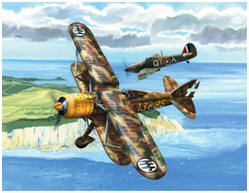 This kit continues my recent interest in biplanes following from my Nieuport 17 and Bristol F2B. This however being  of a later vintage the Fiat CR42 is a different animal, there being very little rigging for a start. I could have bottled the paint scheme there being a couple of basic colour schemes available on the decal sheet but I had decided to go for it and tackle the very interesting (and potentually disastrous) Italian splinter scheme shown on the box.
Classic Airframes are now sadly defunct so this limited manufacture kit is starting to be a bit of a rarity, it’s almost a pity to build it!
The kit consist of two sprues of injection moulded plastic ( which to be fair is a little crude in places) , a set of exquisite resin parts and a photo etch fret.

After all the parts were given a blast in my ultra sonic cleaner I made a start on the cockpit, most of which is constructed with resin and etch parts. This is the first time I had made a kit with extensive resin components the first of a number of firsts on this model.

The cockpit and etch parts were constricted with Cyrano acetate [1]. This was painted light grey and given a coat of pro modellers (dark) to give that lived in look. The painted photo etch instrument panels were then sandwiched together [2] and the dials glass simulated by a small drop of Klear[3].

As I continued to assemble the cockpit components I became more an d more puzzled , the instructions clearly showed the cockpit floor extending beyond the seat but try as I may the parts definitely didn’t assemble like that , at one point I was convinced I had lost a part but after a search of the internet found a build article that mentioned that same problem and put it down to inaccuracies in the drawings.

The instrument panels, cockpit side bracing and some excellent photo etch seat belts were than added to the assembly.  When I went to dry fit the cockpit tub into the fuselage side it just wouldn’t fit , necessitating the bending of the cockpit bracing in a somewhat unrealistic angle , fortunately this is well in the depths of the cockpit so no one will know ( unless they read this)[4,5].

Once I had resolved the fit issues I was ready to join the fuselage halves, I have recently been using Tamiya liquid cement for major joint cementing, you just need to bush it over the joint’s surface and let capillary action take the glue into the seam. This being a limited run kit there were no location lugs to line up the fuselage halves , the job having to be achieved by lining them up by eye. This was quite a struggle as the halves didn’t quite match requiring a bit of filling and a hour or so judicious use of a sanding stick to get the fuselage looking as though it was made from a single piece.

The pieces of the lovely resin radial engine ware now carefully cut from the formers and clean up with scalpel and file. Once assembled the assembly was sprayed Alcad Aluminium  and the photo etched con rods added. The assembly was the given the pro modeller treatment to bring out the detail[6].
The engine cowl was then assembled, and the joint lines cleaned up, finally the wheel fairings were built , for the moment minus the wheels which I will add later.
All was now ready for the fun bit.
PaintingI have recently discovered Tamiya Fine Primer which is now my favourite medium to prime my models, as it is a rattle can I made the trip into my garden to spray the model. As it was quiet windy I got as much paint on my hands as the model, but the result as a nice smooth surface [6]  on which to apply some pre shade. This was achieved with thinned Tamiya XF-1, sprayed at a low pressure close to the model. I wanted to get very fine lines for the wing and fuselage stringers which on this aircraft are place very close together[8].

The top wing and engine cowl were given the same treatment. The cowl was then sprayed Tamiya Matt Yellow with a couple of light coats leaving the  pre shade to show through[10].

The bottom surfaces were then sprayed Gunze Sanyo light blue and the upper surfaces Gunze Sanyo sand [11,12], I was then ready to paint the tricky camouflage scheme.

I started with the red brown patches after some research I converted the FS colour reference denoted in the instructions to a mix of Tamiya Red and Brown which I diligently mixed. It did look a little red but I pressed on regardless. I had a Luftwaffe splinter camouflage stencil [12] which I used to good effect on a ME109 recently so I sprayed the red brown with a low pressure. It did not go well , the paint was far too red and the splinter scheme did not match the Italian pattern , back to the drawing board!
I wiped off as much of the paint as possible which unfortunately took off some of the base sand colour [14], which I resprayed , so much for my pre shading.

I remixed the paint adding much more brown and then sprayed small patches onto the fuselage at low pressure freehand. The wing patterns were also sprayed using the box artwork as a guide. Next the green patches were added in the same way using Tamiya XF26

The upper wing was painted in the same way [16]. While handling the upper wing I had a minor disaster after spilling some thinners on my fingers and taking off a patch of the  paint on the underside of the wing, b$$$$ks. This had to be repaired before moving on.  The camo scheme sill didn’t look quite dense enough so I had another session with the Brown and Green adding more patches. Finally using the sand base colour I cleaned up any areas of heavy over spray between the patches The plane was then given a coat of Klear and the cockpit canopy added, This was a little over size (in width) so I dipped it in boiling water to soften it before gluing it place. I the did a coat of Pro modellers to fill the panel lines, in truth this didn’t work too well as the panel line were fairly shallow and didn’t hold the stain too well , still enough remained to give an overall impression The resin exhaust pipes were painted Alcad Aluminium and then coloured with MIG pigment rust [17]The engine and cowl were fitted and now it was time to fit the struts and upper wing.

I have recently purchased a biplane assembly jig [18] and I was eager to try it out. Unfortunately the diagonal wing struts on this aircraft interfered with the jig so I couldn’t use it in the manner it was designed for, though it did make a handy rest for the model.

I will review the rig further when I build a model that it is suitable for.

The Struts were glued in place which was a bit of a trial as it was difficult to identify which was which and which way up they went ( I go very muddled) . When it cam to attach the top wing I had all sorts of issues either the outer struts fitted or the inner carbines but not both , after what seemed like hours of struggle I finally got it , but had manage to get glue every where! [21]. Fortunately I managed to chip most of it off and touch it up so the result didn’t look too bad.

The final bits and piece were completed ( wheels , and propeller) and the assembly was complete. The decals were then added, which for a change provided no dramas, and sealed with another coat of Klear. The two sets of bracing wires to the outer struts were provided by stretched sprue.

Finally the airframe was weathered using Pro Modellers dark wash and Tamiya smoke and a matt varnish overcoat added to level everything down.
I am quite pleased with how this kit turned out, the camo scheme was always going to stretch my embryonic skills, now I am keen to try may hand at further Italian craft. 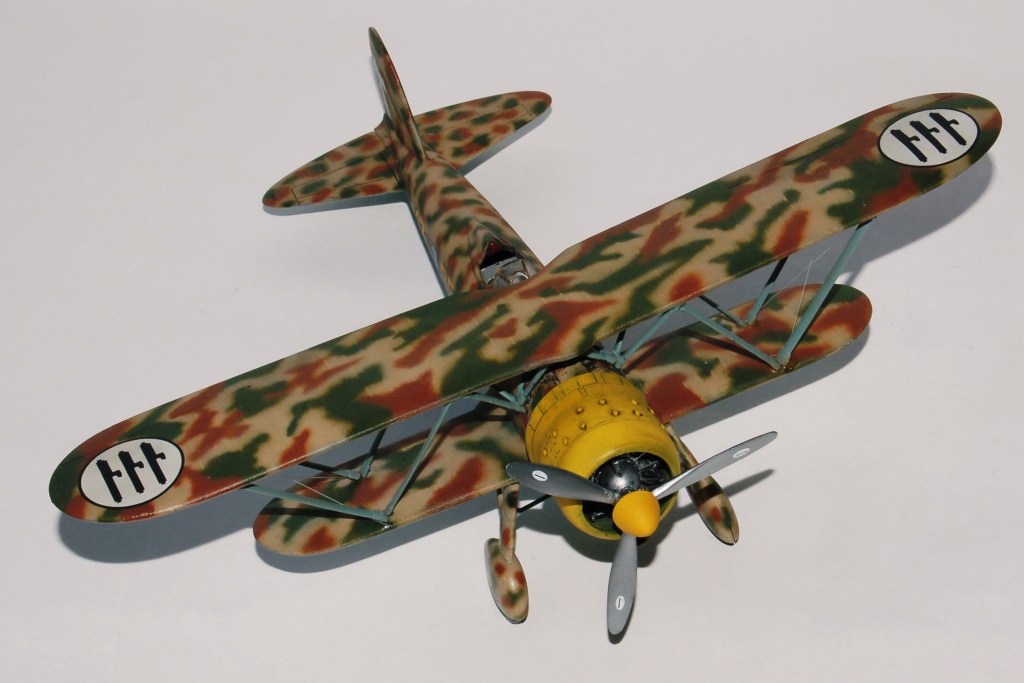