When I was a child …

… we would spend our family holiday in Rhodesia (now Zimbabwe), a beautiful country fighting a brutal terrorist war. As a young boy these were exciting times. Soldiers and army vehicles everywhere you looked, driving in armed convoys between the large cities, the excitement (probably not shared by my parents) when our car broke down as we travelled in a convoy between the South African border and our destination city for that day. The tail end escort vehicle (the convoys had three armoured vehicles, one at the front, one in the middle and the tail end charlie) stayed with us while the middle escort vehicle moved to replace the tail end charlie. One of the soldiers got our car going again and we raced to catch up with the convoy.

One afternoon, at Lake Kyle, my sister and I were playing in the pool when I heard the sound of helicopters approaching. It was loud. As we looked above the line of trees at the edge of the pool in the direction from which the noise was coming, two Alouette helicopters came roaring over us at just a little above treetop height. As they shot over us I remember the barrels of the machine guns poking out the side and a hand waving back as my sister and I jumped up and down waving excitedly.

Possibly that was the start of my love affair with the Alouette helicopter. I remember reading once that as the gunners fired the machine guns, the helicopter would be pushed to the side by the recoil.

Later on as a 19 year old doing his national service at Air Force Base Ondangwa (an airbase on the SWA/Angola border from which many raids by the SADF were launched) I got to see many SAAF Alouettes (both gunship and general use versions).

Heller have a pretty good 1/72 scale kit of the Alouette. I have already built one, pretty much an out of the box, as an early SAAF version in overall olive drab and with no national markings (a possible indication that it was part of the South African aid to Rhodesia at the time). It was a pretty easy build, the most difficult part being the glasshouse canopy.

Buoyed by the success of my Wasp helicopter at the St George competition, and fuelled by the newly found realisation that I really enjoy building the smaller helicopters, I decided to build another Alouette. As it is a French made helicopter it falls in with the ‘French Connection’ theme of the next club competition.

I searched the web and found some really good reference photos of a number of gunship configurations used on the Alouette by the SAAF.

The Heller kit is a pretty good kit by itself. There

is an etched metal set available for it as well by ExtraTech.  which I ordered from from Hannants and was happy that I did as it contains a lot of really useful parts.

I started the build by gluing the fuselage halves, the cockpit floor and the rear bulkhead together. 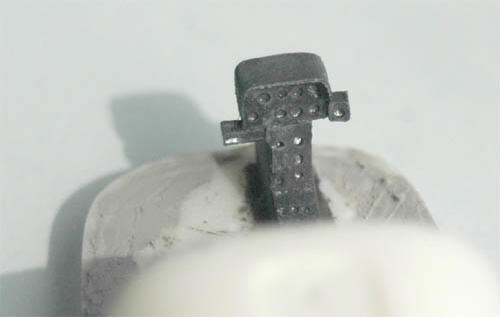 As that dried I proceeded with the instrument panel. The kit provided panel is basic. They provide a pretty poor decal representing the instruments themselves. I opted instead to get a thin sheet of plasticard, drill some holes to represent the individual instruments and glue it on top of the gloss black painted kit parts.

Alouettes have a number of boxes with assorted instruments stuck to the side of the centre console that are not represented by the kit. I filed some sprue to represent these. The instrument panel provided with the etched metal set does represent these additions quite nicely. I did not use the etched metal part as I felt that plastic sprue looked better. This is of course a personal opinion, and I’m sure there are people out there that will disagree with me. I added an overhanging top to the instrument panel and finally added some stretched sprue wiring from the back of the instruments attached to the side of the console. The SAAF Alouette is painted black inside, and all that black made it pretty difficult to see any detail, so I did some drybrushing with dark grey and then light grey paint to try highlight some of the detail.

The co pilot side of a SAAF Alouette gunship is pretty empty. The seat has been removed and there are a number of metal plates bolted to the floor. These are easily recreated with thin sheets of plasticard.

As this was going on I started on the pilots seat and the engine.

The SAAF gunship pilot’s seats had additional metal welded to them to provide protection from small arms fire. I used the basic Heller seat and glued some correctly shaped plasticard in the appropriate places. The seat was painted black and dry brushed with dark and light grey.

I used the basic Heller engine except for the air intakes. Throughout their use in the SAAF there were a number of variations of air intake filters fitted to the Alouettes. I had a series of pretty good photos of an Alouette with a large, rectangular intake on each side. I filed some sprue to the correct shape and glued them to the Heller engine. The various pipes that you see all over the engine were represented by stretched sprue of varying thickness. I did use two of the three Eduard pieces for the engine. I painted it as I went along. The Eduard set provides some really brilliant filter covers that I will glue on when I am happy that I will actually complete the kit. 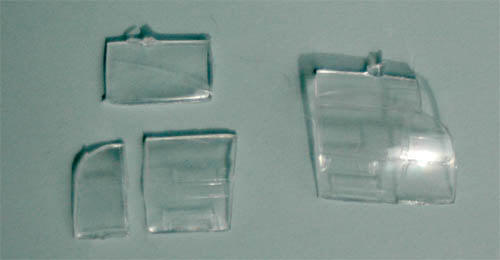 The glasshouse canopy comes in three parts, the front, and two side halves. The side halves have all the doors moulded as one piece together with a section of the roof. I have cut the doors off as I plan to have the pilot’s door opened, but the sliding door on the pilot’s side closed, with the opposite on the gunner’s side.

With the canopy halves glued together I started on the cockpit roofing. The photos I have show that the Alouette has a radio hanging from the ceiling and there are a number of wires running along the top, all joined by velcro strips (?) at regular intervals. I made a radio out of some plasticard and the internal framework was made from a thin sheet of plasticard with gaps cut out as required. The framework was glued on first, and then the radio attached to it. Then came the fun of trying to simulate the wiring. I took a number of pieces of stretched sprue and to simulate the velcro strips I cut narrow strips of thin plasticard, brushed liquid cement on them to make them soft and then wound each strip round the sprues. Between each strip, before the glue dried, I tried to get the impression of some wires being looser than others by gently pulling on some. 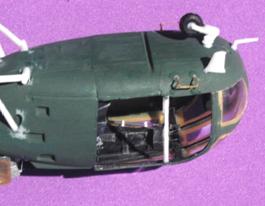 After gluing the canopy on I masked it for painting and filed the fuselage level to the canopy edge. Next up came the supports against which the sliding rear doors, and the pilots’ doors would close. These were made from a strip of plastic card with some stretched sprue glued down the middle to represent the ridge (trying to make a T shaped cross section).

The sliding door behind the gunners seat was going to be closed so I put some interior detail on it. Basically all this was a couple of strips of stretched sprue glued across it, painted black and then dry brushed with grey.

I glued the pilot side sliding door, filled the cracks with superglue, masked the window and then gave the helicopter its first coat of paint. 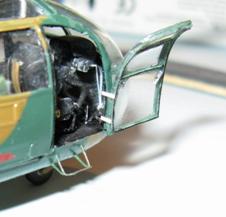 I turned my attention to the two pilots doors, which were going to be glued in the open position. There is a rubber seal around the edges of the doors. I turned to my old favourite, stretched sprue, which I glued around the edges and two strips across, between each of the windows. I filed the sprue down a little, painted it black. 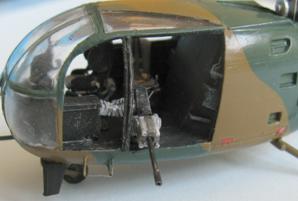 At about this time I started on the gun.  I worked out some measurements for the gun using the photos I had relative to the Heller kit. The spares box was raided and a spare missile came in handy. I cut two sections from it to act as the base welded onto the floor and the bottom of the rotating unit onto which the gun was attached. Pieces if plasticard of assorted lengths and thicknesses were used to make the framework and the actual gun. The box of bullets was made from … you guessed it … plasticard. The belt between the gun and the box was made from H section strips of plastic, with one half filed off so it was a U shape, then cut into very thin parts and joined to a narrow strip of card. In total there are a little over 50 parts that make up the gun, its base and framework, the bullet box and the feed link.

I used decals from MAV decals. First they had to be sprayed with clear varnish, when that was dried I applied them using microset and microsol. I had to pierce the cookie cutters (the new SAAF insignia) and apply a second helping of microset to prevent some silvering.

Finally I applied a coat of satin varnish. I glued on the doors and finally the mesh covering the air intakes. 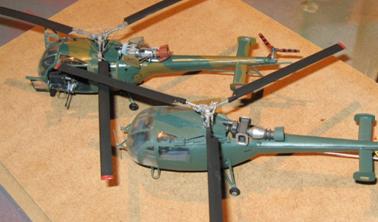 I have discovered that with SAAF aircraft, although the general camouflage schemes for aircraft types may remain the same, there are a lot of differences happening over time. The air intakes for example, I have seen at least three different types of filters on the photos of SAAF Alouettes. I found the same with the machine gun configuration, there are at least four configurations that you can choose from. Some pilots seats have additional armour, others don’t. So the approach I take is to model a particular aircraft at a particular time.
This is the second Alouette I have built since coming back to model building. I was very happy with the first even though it is a ‘from the box’ build. Comparing the two shows that I have definitely improved. It also, however, shows that I have a long way to go!