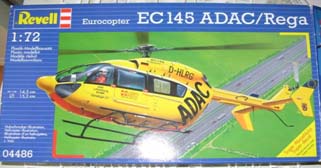 I was browsing round Southampton and discovered that The Entertainer (toy shop) had closed down and been replaced by another toy shop (Modelzone) which stocked an interesting stock of Revell kits. Featuring large in this collection were assorted EC-135 and EC-145 helicopters. I bought a few of them. Britmodeller was starting a helicopter group build so I chose one of the kits to build for the Revell  group build.

The kit itself is well moulded, engraved panel lines and some very nice detail. It’s basic in that, if built out the box you’ll have closed doors and so not see much of the interior. Being the fool that I am I chose to have some doors open, so out came the scalpel and off came the clam shell doors at the rear, and a sliding and crew door from the left hand side.

With the walls completed I moved on to the roof and floor. I didn’t do too much here, just two thin strips of plastic card for the stretcher tracks and I thinned out the edges of the ceiling .

Then came the time to put all the pieces together.

I did some work on the seatbelts using a technique described on Britmodeller. This worked well but for a first attempt I felt that the buckles were too large. Not the end of the world, I just put those seatbelts on the seat furthest from the open door.

I attached the canopy, masked it up and started painting. There are a number of windows that bulge out on the side. If left as they were they had a magnifying effect on the what could be seen inside, so I carved out some of the inside to try reduce this effect.

Revell do provide decals for the black trim but these were too difficult to use so I masked and painted instead. Having cut the clamshell doors I had to cut some of the decals so that they could be fitted correctly on the open door. By now I was starting to get impatient and just wanted this build finished (those who know me know that this is what happens when I build kits, tons of patience at the beginning, fantastic work on detail, and then just slopping on paint and decals towards the end).

So it was that I rushed through the interior detail, glued it inside and viola! My second build of the year was complete. 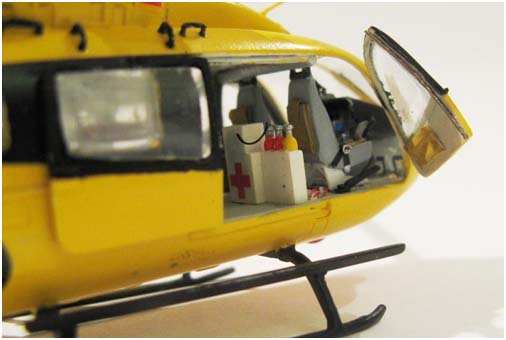 Things I learnt from this build were, don’t be scared of the clear parts, Apart from the fact that they’re more brittle than the regular plastic parts, they can be filed and polished back to a wonderfully clear state after being filed and scraped.

This is a nice kit, a pleasure to build, and overall I’m happy with the result of my efforts. It’s not perfect, but then if it was I’d know someone else built it.