For the US competition I decided to leave military vehicles alone and build something from one of my many other interests – a LeadSled.

What’s a leadsled I hear you ask?

Basically when hot rodding started in the forties the American youth used to strip everything off the cars to make them go faster. As these youths grew up they decided they needed a bit of comfort and so the custom was born – usually a fairly new car which was then roof chopped, lowered and having all the chrome and door handles removed, often with trim from other cars fitted in its place. As fibreglass wasn’t around there was only one filler available – lead. Thus these cars became very heavy and not suitable for drag racing from lights, but were used to cruise instead. Hence the name – Lead Sled.

They have also been called land yachts or boats due to the lack of speed and handling – mine should have been christened the Titanic in hindsight!

The most famous car used for building a leadsled is a 1949 Mercury – first chopped by the Barris brothers in 1950 – see the pic above for a radically chopped and flamed sled.

Revell, as luck would have it, released a custom chopped ’49 merc in 2007. The only other merc custom kits were unchopped and you had to buy a resin chopped body – one of my future projects!

I got mine for my birthday at the beginning of July and decided to enter it into the US competition. Giving me under 3 wks to build it – not a good move as I was to find out.

I ordered some decals and wheels from the US, as you may well know I can never build anything standard!

The kit is lovely and goes together very well. I decided to build the kit `kerbside’ as it is known – so no opening bonnet or doors – this meant I only had to build the main block of the engine and not worry about the detailing – this kit was going to about wheels and paint! No weathering on this baby!

The chassis is in 2 main parts – the frame and the chassis with interior. The frame was assembled and sprayed satin black. The wheels were too fat to fit in the arched so instead of cutting the car up I cut the wheels down, by 3mm. Disks and mounting pins were added from another car kit and these were fitted to the chassis. The engine block was then attached and I had a rolling chassis – all pretty event free so far, apart from slicing my finger open whist trimming the tyres down – ow! Still it’s not a good job unless you bleed on it, or so my dad used to say!

After a quick look round Halfords for a suitable colour I settled on Ford Pacific Green – more of a teal than a green as it turned out.

The interior was sprayed an off white – I think my Games Workshop white is past its sell by date! The panelling on the seats was painted a Games Workshop green – the best green I had to hand! The dash was sprayed the body colour and decals applied to it.

Here’s the first sign of trouble, or a small iceberg in the way of my journey – the decals are too big for the recesses on the dash. Uh oh. Using MicroSol on one decal made matters worse as it crumpled into the recess – oops. The rest of the decals were laid on top of the recesses a left to dry slightly raised up. Not that you’d notice as the lowered roof gets in the way!

Once the interior was finished it was masked off and the chassis sprayed satin black. The chassis was then attached to the frame. Not bad, going well so far…

I should explain that I was cat sitting at a friends’ whilst building this kit so had only a few of my usual resources. The spraying was done outside either in the back garden or at work. 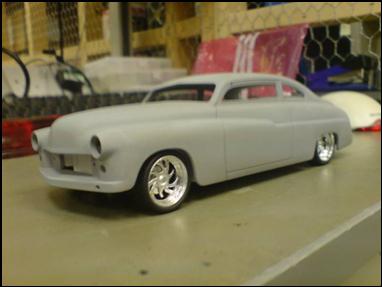 Lesson one – spraying outside – check which way the wind is blowing and stay out of it! I now have some very small green dots on my glasses.

After a few coats of green and a couple of days drying it was ready for the decals.

These were a nightmare – the larger ones split on immersion in water and were difficult to fit as they split once on the model too. Most were lined up ok, eventually, after much swearing and sweating – no spares and no time order more. Several of the cracks needed touching up which involved lots of different Games Workshop reds and a bit of mixing. The pinstripes were then added – these were the kit decals so went on ok.

After a days drying it was time for some clear lacquer.

Lesson two – spraying outside – make sure your kit is well secured, especially if a gust of wind blows it off the wire it was hanging and it hits the floor – ouch! Panic! Swear! Calm down and check the damage – one large scrape on the boot – not good but a after a light rub down and touch up it looked ok. With a decal over it, it looked even better! Ok now more lacquer.

Lesson three – make sure the decals have had a day to dry or the lacquer crinkles them – Noooo!! Fortunately they recovered and the only noticeable damage was where I interfered and creased one trying to make it flat.

Lesson four – don’t panic – there’s nothing you can do with lacquer until it’s dry.

More lacquer – this went opaque and turned the car grey in places – why me? After a chat with Paul Adams – he said it was fine, don’t worry just use more lacquer – easy for him to say as I’m panicking!

Even more lacquer – a really heavy coat this time – uh oh – it’s got runs on one side – this car was sent to try me.

After another chat with Paul I rubbed down the lacquer runs and splodges where I tried to rescue it, being very careful to avoid wrecking the decals. The runs were then touched up by brush where needed. The overdose of lacquer had melted a decal on one side – luckily after cutting up some of the unused decals I made this good – phew.

The body was then lacquered again – this was done on Tuesday before the competition – eek!

Left over night to dry and was given another coat first thing in the morning. Once dry the windows and all the chrome work was fitted – very carefully – I’d already rubbed down several fingerprints in the lacquer. 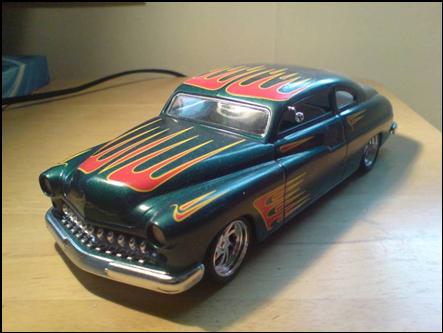 I left the windscreen wipers off as they were not very well moulded – I might get some etch ones in the future.

Once at the competition night I found the roof had a scuff in the lacquer from the journey there – I blame Dale’s driving! I think it needed yet more time to dry. Another lesson learnt.

The car from a distance looks great, in my humble opinion. Close up is another matter. It was one big learning curve and I shall apply all my learnt lessons on my next car project – I shall be building my perfect leadsled – if I can’t do it in real life I’ll do it in model form!

Until then I’m going back to muddy, dusty and battered tanks! 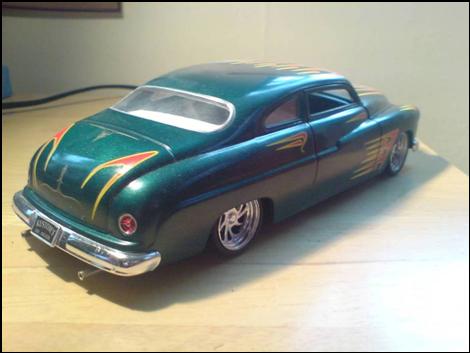