Having done enough 1/48 military kits to fill a small shelf I fancied something different. Whilst browsing the net I came across the latest trend in Japan, ‘Itasha’. Itasha roughly translates as ‘painful car’. Owners decorate their cars with massive graphics from their favourite anime cartoons. These vary from compact city cars to expensive sports cars.

I thought this was a great idea – I could encompass two of my favourite hobbies – model making and anime all in one. Now to see what was available; I went on my favourite Japanese model site – www.1999.co.jp/eng and found several car kits and decal sets. Mmmm… Choices… In the end I settled on a set of Muv Luv decals. I know very little about Muv Luv but liked the decal set and it included enough decals to make 2 or more cars including a Lancia Stratos – one of my favourite cars. The decal set wasn’t cheap and neither was the postage but it was worth it, I think, as long as the quality of the decals was good.

After looking on the net I even found pictures of the real cars the set was based (see the Lamborghini pic above) – Cool, so I now had reference photos too.
I decided not to build the Lamborghini but to choose something different, something Japanese, but what? So again I went to 1999.co.jp and browsed their car kit listings – how many kits?? After weeks of plotting and planning I ignored all my previous choices and went for a Nissan Skyline R32 from 1989. I found several kits and gave my sister the list for my birthday. I didn’t know which one of the kits I was going to get so I could still have a bit of a surprise!
In the end I got an Aoshima R32 Skyline drift racer. 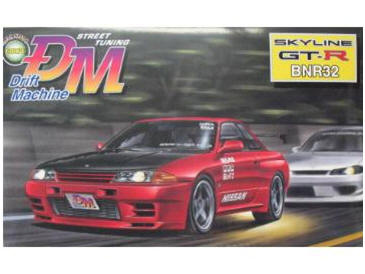 On opening the box I was slightly dismayed at how few bits there were but the body looked well moulded and as I liked the wheels so I didn’t have to get aftermarket ones I was planning to get. The only extras I might get is a set of etch seatbelts and a turned aluminium exhaust… We shall see how the rest of the kit goes first.

The basic build didn’t take long and went together surprisingly well. I built the chassis first and then the interior, minus front seats – I haven’t decided whether to use the original pair or the drift race seat yet.

These were then sprayed satin black and given a layer of matt coat. I then added the clock decal and the interior was nearly finished. The kit comes with a huge rev-counter but no placement instructions so I’ve left it off. The instructions can be vague to say the least so I built the kit to my spec.

Rough build up of car

Spurred on by how quick the progress was going I started rubbing the mould lines off the body whilst the black bits dried. I decided not to use the race spoiler but stuck with the original kit one. Once that was in place and rubbed down the body was ready for a coat of primer. After rubbing down any more lines made visible but the primer it got a second coat and it was ready for painting.

But which colour to paint it? I didn’t want to use the dark blue of the Lamborghini as that hid the black tribal style graphics. I had to find a lighter colour I liked that went well with the overall scheme of the car.

I had a vague idea of what I wanted, a light silvery blue. Paul Adams bought a colour to work for me to see; unfortunately it was too silvery for my liking so I wandered off to Halfords on a mission.

I found a few colours I liked , in the end going for Vauxhall Sapphire Blue, which ended up darker than I thought but I liked it and it was lighter than the Lamborghini blue, which was the main idea.
By now the primer had dried and was ready for a coat of paint. This went on surprisingly well – I’ve steered clear of car kits since my Mercury was such a nightmare.

I then applied a second coat and left it to dry overnight. Paul recommended a coat of lacquer before applying the decals so I gave it a coat of Humbrol gloss , BAD MOVE, it went very dull. Halford’s and Humbrol paints do not mix – bugger – now what? I thought about stripping the paint and ended up giving it another coat of blue and after another trip to Halfords, a coat of Halfords clear, this came out ok, if a bit heavy, phew – rescued!

On to the fun BIT – the decals.

These needed a bit of work before fitting; the Lamborghini they were designed for is longer with a higher tail-end than the Skyline. I cut each of the side decals in half to begin with so they would fit better. I then cut out all the decals to check sizes and positions. The tribal designs were cut into smaller bits where possible, to ease fitment , these were to be applied first.
OK, here goes: the very front tribal design was first dipped in water, it took about 20 seconds to come off the backing paper, all ok so far. Carefully using tweezers I placed it roughly in position and using a thick flat paintbrush I manoeuvred it into final position. No trouble so far, I’m impressed. I then gave it a coat of MicroSol so that the decal fitted into the panel lines and moved onto the next decal. The tribal decals went on fine, even the long ones. This was fun compared to cracking decal nightmare of the Mercury I had previously built. These were left to dry for a couple of hours interspersed with a couple of coats of MicroSol.

Impressed with how easy to work with the decals were, I moved onto the bonnet. One more decal before bed I said to myself, this was Sunday evening after all! The bonnet decal is the biggest of the car so could have given problems. My only trouble was not enough water under the decal as they dry and stick quite quickly. The decal went on beautifully and once in place I ran a fresh scalpel down the bonnet lines to trim it – no problem. I gave it a coat of MicroSol to make it form over the bonnet bulges and left it to dry. ‘Looking good’ I thought. I had an hour to kill before “Mock The Week” so I got carried away, have I mentioned before that I’m impatient? I then fitted the right hand side girlie decal. This was going to make or break the decals, as there are lots of different angles for it to mould to.

Luckily these were easier than I could have hoped for, the decal went in place fine and given a couple of coats of MicroSol it started to conform to the body. I trimmed under the wheel arch and down the door line and finally left it alone for the night.
After work the next evening I  got on with fitting the other side decals. This was more difficult as I was going to use the robot cut from the righthand decal and overlaid the trimmed down lefthand decal over it. Fingers crossed, I got the robot in place and realised part of it covered the door handle – eek! Carefully removing the decal back onto the backing paper I trimmed it and re-applied it, have I said how impressed I was with these decals? A quick coat of MicroSol and I placed the girlies into position. Another coat of MicroSol and the sides were finished, well nearly; I added the GTR, AGE and GoodSmile Racing decals for a bit of alternative colour.

Two more evenings later and the decals were all fitted. Phew! Paul kindly volunteered to give the body a coat of 2-pack clear whilst he was on holiday to seal the decals and make it all nice and shiny – cheers Paul.

That left me with the interior to finish and the glass to paint.

Paul had very kindly offered to 2-pack lacquer the body shell, so I left that with him and got on with the other bits. This is where it all started to go a little pear shaped.

After Paul returned the Skyline body all lacquered & shiny, I polished it to get it “really” shiny. Not being used to polishing (tanks don’t normally need it!) I couldn’t get it anywhere near as good as the bits Paul did but it came out well, I think. Although you can see the outline of some of the decals where I didn’t polish it enough and I nearly went through the lacquer after too much polishing!

Putting this aside it was onto the windscreen, I decided to paint the rear windows black, as I wanted to decal them. This involved a lot of masking – not a problem. The spraying went well and all was fine until I removed the masking tape and… horror! The windscreen had a crack in it – rats, (putting it mildly)! Mass panic! Luckily after a bit of polishing the crack had pretty much disappeared – Phew, panic over, for now! I then painted the rear lights using Tamiya Clear Red and Orange – very nice. These were fitted with tin foil behind them as reflectors. 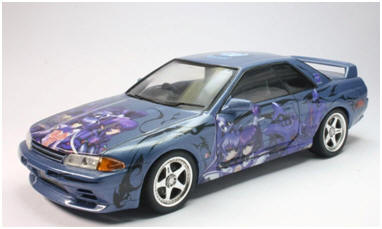 Paul managed to get me a rather nice machined exhaust at one of the shows he attended so it was onto this next. I was trimming the parts off the original exhaust when disaster struck, again. Slipped and sliced my hand open – oops. See last month’s safety article for more gruesome details. (Ed – so it was Paul’s fault!!!) This put the car on hold for nearly a month. I got on with my Humvee whilst recuperating.

After a month off , work on this car resumed. The window edges were masked with Paul’s helpful instruction – this nightmare re-enforced why I stick to tanks! It was then sprayed satin black. This led to the second window disaster – the crack got worse when I took the masking tape off. I wasn’t going to buy a new kit just for the glass so I will have to hide it in some way. Ho hum. 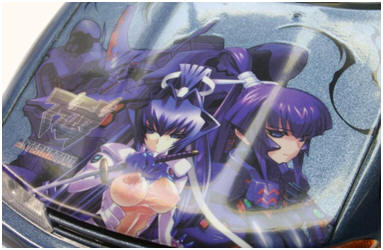 I panel lined the car using 0.40 and 0.35mm drawing pens. The other way to do it is with black paint thinned down heavily – maybe next time as using the pens didn’t work out too well. The window rubbers were then hand painted matt black. They didn’t come out too badly, in my humble inexperienced opinion! –another thing to practice. I can see why car modellers are a rare breed – I think I will be sticking more to armour in future.
The front lights had the indicators painted with Tamiya Clear orange but they wouldn’t fit, as there was too much paint and lacquer on the body. After rubbing the glass down it fitted and I glued it using my glass glue, which dries clear. These didn’t come out too bad but one has a gap on the indicator – bad moulding or too much rubbing down? Not sure.

The windscreen wipers were last. These needed bending into shape as they didn’t fit flush and were very carefully glued in place.

And finally the car is finished. My second model car project done, at last. It came out better than the leadsled but not as good as I hoped. I will be building a couple more car kits in the future and they are a constant learning curve for me. We’ll see how they turn out… 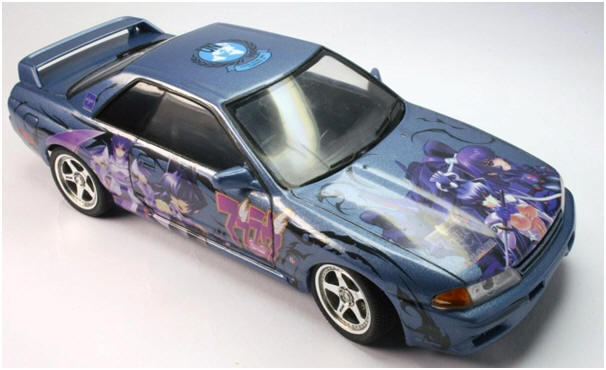