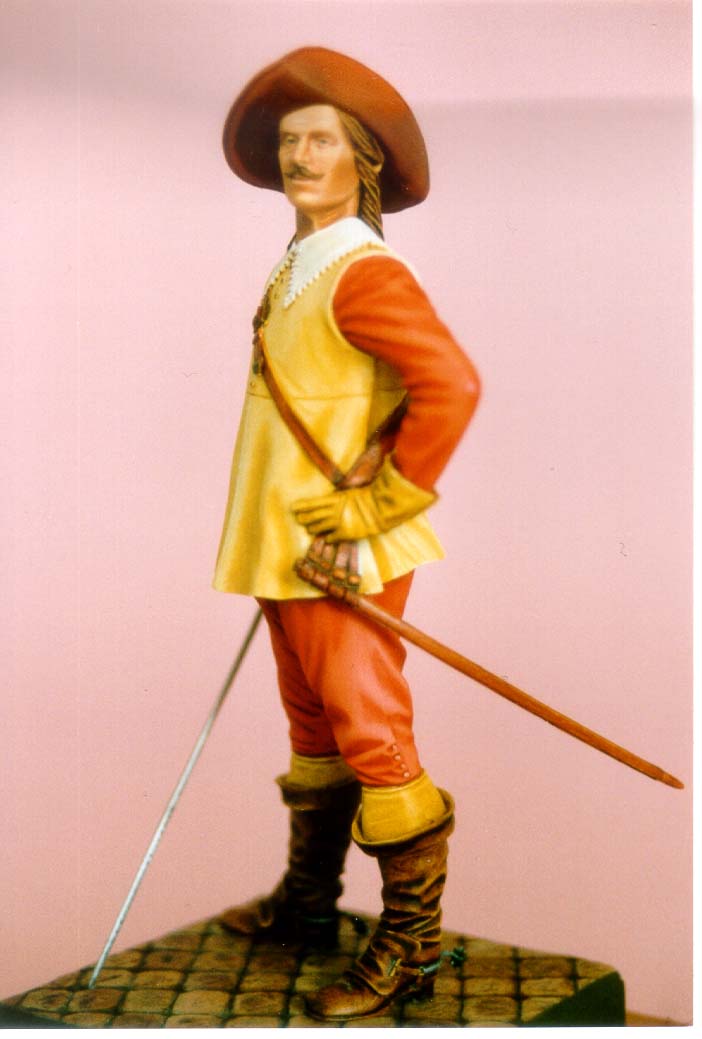 Every now and again a model figurine is released which I just have to have, even if it is unrelated to my main area of interest which is Napoleonics. These have given me such pleasure to build and paint that I now find myself choosing figures more for their character and quality than the subject matter. This particular figure, sculpted by Derek Hansen, I find particularly striking. It has a very natural “straight up and down” pose and the cavalier has the haughty look of a very capable swordsman about him.

Fort Duquesne’s kit #209, “Cavalier ca. 1630”, comes colourfully presented in a stout cardboard box. A single colour photograph of the completed model is affixed to the box lid. Instructions and notes by Jim Johnston are printed on one side of a sheet of yellow paper.

The head, torso, legs and boots are a single casting. The other resin items are the arms, hat, sword scabbard, spurs and base. The sword blade and a couple of detailed knuckle guards for the sword hilt are white metal, cast by John Tassel of Sovereign Miniatures.

Construction started by removing the mould pouring plugs and cleaning up the parts. Owing to their quality and fit, this took no time at all. The sword hilt in the figure’s right hand was drilled out to accept the tang of the blade, and the tang itself needed some thinning as well.

I prefer to paint items separately and assemble them to the model later. The torso was attached to a wooden block for handling during painting and the arms and hat to wooden dowels. The dowels fit into a wooden block to hold the parts safely. For the hat, a panel pin was tapped into the end of the dowel, the head cut off and pointed. This was then pressed into a hole drilled into the underside of the hat. A pair of panel pins were tapped sideways into the dowel holding the arms and these were cut and pointed as before. The arms were then drilled and pressed into position so that they hang down as if attached to the torso: this was done to assist in positioning highlights and shadows during painting. All parts were given a good scrub in detergent, rinsed and dried before priming with Halford’s white acrylic primer. I warm the primer before spraying, but take care and don’t overdo it as it is a pressurised can. I avoid handling the parts themselves until the time comes to assemble the model.

I commenced by painting the face. The body was masked off by wrapping strips of Clingfilm around it and the ends secured in place with masking tape where necessary. I did not want to get any paint on the collar, so Maskol was applied where the collar was not already protected by the Clingfilm. The skin was airbrushed with a 50:50 mix of flesh and white acrylic followed by a darker tone directed from beneath. This picked out areas of shade which were reinforced later by brushing with oil paint. The mix used was Rembrandt gold ochre + Winsor & Newton burnt sienna, light red, alizarin crimson and titanium white. Don’t forget the ears!

The hair and moustache were blocked in with Humbrol pale yellow 81 and shaded with various mixes of Mars brown, burnt umber and Van Dyke brown.
The eyes were painted in a number of steps, leaving the paint to dry between each. The “whites” of the eyes were blocked in pale blue/grey, a slightly darker mix applied at the top where the eye is shaded by the upper eyelid. A spot of thinned matt white enamel was applied where the irises were to be located: the spot size wants to be a little larger than the iris. I next painted the iris itself burnt umber and then added a tiny dab of Winsor & Newton iridescent white to the centre and then drew it out, star-like, towards the edges. Leave this to dry thoroughly and then paint the pupil ivory black. Tiny spots of iridescent white were added into a top quarter of each pupil and where the iris contacts the lower eyelid.

I next painted the jerkin. A pale mix of Naples yellow + Rowney yellow ochre + titanium white + violet was made on the pallet. Liquin was added to some of this and applied as a glaze over the white primer/undercoat. Neat mix was added wet-on-wet to start the build up of shade. Lukas yellow ochre light + Lukas ultramarine violet + titanium white were used for deeper shade after the base coat had dried.

The jerkin, boots and gloves were masked off using Clingfilm and Maskol for the breeches and arms to be airbrushed using a mix of Humbrol 82 orange lining + Rowney Scarlet Lake. Don’t apply the paint too thickly as you want the white undercoat beneath to accentuate the highlights. A darker shade was then made by adding alizarin crimson to the mix and this was sprayed up from beneath. (It is okay to airbrush with oil paints, but do take extra care with ventilation as some of the pigments are toxic). Once dry, further shading was brushed in using a mix of Rowney scarlet lake + sap green. A particularly dark shade was added at the top of the breeches where shaded by the jerkin and where the sleeves go into the gauntlets.

The gauntlets and tops of the boots were blocked in Naples yellow + yellow ochre + violet + titanium white. Shading was Winsor & Newton yellow ochre + Rowney raw sienna. The boots themselves were coated in burnt umber over an undercoat of Humbrol pale yellow 81 and the excess removed using a dry brush to leave heavier residues in the creases. Deeper shading was added using Van Dyke brown.

At this point the figure was really taking shape. The bulk of the painting was done and only details remained. The collar was shaded using a mix of Naples yellow + ultramarine violet + matt white enamel. I also used this for the bone buttons in the legs of the breeches. The sword belt and scabbard were blocked in using Humbrol CNR125 yellow and given two glazes of burnt sienna + Liquin and shaded Rowney burnt sienna when dry. The buckles and the buttons of the jerkin were blocked in Rembrandt gold ochre and highlighted using gold printer’s ink.

The hat was airbrushed Humbrol R146 red & shaded Humbrol 180 Red Leather. Deeper shading using Rembrandt Flesh Ochre + Lukas ultramarine violet was applied by brush. The hat band was undercoated Humbrol grey 140 with lines of shade added in black with thin white line highlights. The whole of the band was then given a silk effect by glazing with ivory black + Liquin.
The two separate knuckle guard castings need to be bent carefully to fit the sword hilt: the instruction sheet shows how to do this. I had managed to break one of the quillons from the resin part of the hilt (cast into the figure’s right hand) and, rather than glue it back, replaced both resin quillons with longer ones made from plastic rod. The tips of these were flattened using a hot screwdriver blade. The steel parts of the sword and spurs were blocked in Humbrol 67 dark grey and brought to life using silver printer’s ink mixed with Paynes grey oil paint. Printers ink with iridescent white was used for highlights. The sword blade was left unpainted until it was assembled in place.

The base was painted Lukas burnt umber and wiped over with a cloth to leave the resin highpoints showing through. After this had dried, the paved surface was dry brushed Humbrol 148 cream and the edges finished in Humbrol Brown Bess. Various neutral mixes of red and brown were lightly applied to the paving and pastel chalk worked in with the wet paint.

The model was assembled using epoxy resin for the main parts and superglue for the details. The scabbard, left arm and hat were attached to the body first of all. The arm was held in place using a rolled out sausage of Blu-Tack. The body was then pinned and glued to the base. Any gaps between the feet and the base were filled with Magic-Sculp and painted over. The sword blade was glued to the hilt and the subassembly positioned and glued to the body, again using a sausage of Blu-Tack to hold it in place whilst the adhesive set. The blade was shaded near the hilt and then given a coat of Klear to preserve the lustre.

A feather was added to the hat as a final touch: I am dubious as to its’ authenticity but it adds to the character! The base of the feather was painted to look like it was tucked into the hat band.

The completed model was then bonded to an Oakwood Studios base.

This model was sheer joy to make, combining as it does first-class sculpting and quality of manufacture for which I compliment all those involved. I can recommend it unreservedly.

If you fancy a treat, have a go at this one and I am sure you will not be disappointed!

One Reply to “French Cavalier”