Some of you readers might remember a while ago I wrote I was going to build a 1/72 VAB armoured car complete with etch kit. Well, this isn’t it! That one is half finished in a box. One day…. 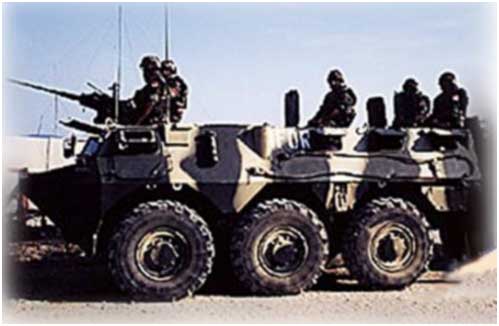 I took inspiration for this VAB whilst going though my sci-fi spares box. I had the modelling light bulb switch on and that was it. For those of you who don’t know the VAB is a modern French wheeled armoured vehicle, either 4×4 or 6×6. See below

I thought this would be a cool basis for a vehicle for some Games Workshop Imperial Guard troopers. The kit is 1/35 and the GW figures are nearer 1/48 so the vehicle would be huge compared to them – even better I thought.

On pay day, I rushed over to Botley (Just Add Imagination) and bought the Heller 6×6 VAB kit they had in stock.

I won’t beat about the bush. The Heller kit is terrible. The detailing is poor and the moulding is soft at best. Thankfully I wasn’t going to be using most of it.

What to use for the conversion?

Luckily I had a GW LandRaider kit half built in my loft. This and my spares box would supply most of the parts. – onto basic construction.

The lower hull was assembled as per the kit, the tyres were not fitted at this stage for painting reasons. Next came the interior, I was going to have the cab with all hatches and doors open. I butchered the interior of the LandRaider for the monitors and control panels whilst the seats, clocks and steering wheel were from the VAB. The seats and floor were raised for the smaller crew too.

The top half of the hull was also modified, I cut a large hole in the top for the twin bolter turret from the LandRaider. Various deck parts and tools were added from a 1/48 panzer III and the LandRaider. A mesh screen from some electronics job I had in the past was added to the roof too. The smoke dischargers, radar and commanders cupola come from the LandRaider. The tool rack at the back was again butchered from the LandRaider interior and as luck would have it was a perfect fit for the hatch hole, another open hatch: sorted.

The various vents came from old Macross Mech kits from the `80s – I knew I’d kept them for a reason! The rear side doors are the VAB rear doors cut down and fitted where the side windows should go. All the handles are made from wire.

I cut 2 slots in the front for some headlights and managed to get them out of place – doh! Still it’s a military vehicle so who says it has to be symmetrical?

The interior was the sprayed in primer and painted grey, given an ink wash and dry brushed. The screens were painted and some decals added. These too came from my old `80s robo-mech kits, some of the externals ones are even legible, not bad detailing despite being over 20 years old. This was then given a coat of matt coat to seal it and some paint chips were added. The VAB was going to be pretty battered, as are most of my military kits.

Now the fun bit – fitting the 2 halves together. First job, mask off the interior. I only did the front part as I forget about the bloody great hole in the back end which meant when it came to spraying I got paint on the inside of the rear windows – double doh!

Then came the gluing, it took liquid glue, superglue, and an hour of holding the kit together whilst watching TV for the two halves to join properly – Heller? Never again!

The rear end of the LandRaider kit was grafted on at this point, it has 4 truck style stacks and a host of vents, great for detailing.

Once it was together and never coming apart. I blagged some Mr Surfacer from Paul Adams and filled all the sinkholes from the Heller moulding process. See all the grey in the photos.

Painting and weathering of the VAB (I’ll name it one day!)

If you read last month’s write up I’d finished building the main part of the vehicle and masked, most of the interior.

The easy bit next – spraying. I gave it a quick wash and blow down with a can of air duster, from a distance, as it’s been known to blow more than dust off!

The assembled kit and wheels were then given an overall coat of Tamiya Sand (the last of my imported can, I must order some more from Europe, you still can’t get it over here).

It was then I realised my mistake, I noticed the rear windows were painted on the inside. “How did this happen ?” I asked myself, it was only then I noticed I hadn’t masked the bloody great hole in the top of the hull – dozy bugger! Note to self : don’t get carried away and always check everything before spraying!

With the base coat in place I mounted the wheels. These should rotate but as the mounts are spindly they tend to break off with too much handling. This means most are now glued in place.

I added the decals next , I used a lot Games Workshop decals, and after going through my collection of spares I found plenty of warning decals from old mech and aircraft kits. Some worked better than others, some GW decals cracked whilst some of my older decals were just too old and failed to come off the backing paper.

It was then I had a brain wave, not too rare an occurrence for me, honest! I thought she’d look cool with a set of teeth on the front. One slight hitch, I had none, but I knew a man who did. Many thanks to Vic Short for two sets of teeth. I used the teeth from one set and the eyes from the other. (Vic: I told you you’d get a mention!)

Once all the decals were in place a coat of clear varnish was applied.

The ink wash came next, several washes of my usual mixture of black and dark brown to bring out the detail. I added several runs to show weathering on the vertical surfaces and around exposed bolts. I completed the wash over several days, waiting for coats to dry and adding more where needed. As I’ve said before you can do as much or as little as you want. Once I was sure it was dry I did the detailing , the tools, guns, etc. The guns were painted with gunmetal and given a coat of Tamiya Smoke paint, this acts like a wash but is thick so it doesn’t run and is great on metallic items. All this was sealed with a layer of matt cote. This dulls washes down, which can be handy if you think you’ve gone a bit overboard or may mean you might need to redo a few bits slightly darker.

With the matt cote done it was time for a dry brush to highlight raised areas. I don’t do as much of this on real vehicles as fantasy ones, as it can look unrealistic. With this model I wasn’t too worried, so with a nice shade of Bleached Bone to-hand I gave it quite a heavy dry brush and lined the sharp edges. The kit is quite roughly cast so the dry brushing blended the different shades quite well. On really smooth surfaces dry brushing can leave streaks so it is best just to highlight the edges.

Once I was happy with the dry brushing I started on the paint chips and scuffs. These were painted using a nice dark panzer grey. Games Workshop tends to use silver for this on their vehicles. As this a fantasy subject either is acceptable. I opted for the darker grey, as it gives a better contrast to the sand colour of the vehicle. As explained before these should be as realistic as possible e.g. where the vehicle will hit things, where crewmen will clamber over the vehicle and where the weather will wear paint. Desert sand has a great ability to remove paint from any surface. I chipped decals away too to show the sand paint underneath and added chips to them too. On really battered areas, especially at the front I used a soft pencil to give the surface a metallic sheen. After several evenings of making the vehicle look battered I stopped and got out my trusty MIG Desert Storm sand pigment and gave to whole vehicle a dusting, especially the rubber tyres. From reference pictures tyres tend to be streaked from the hubs out. So I tried this and I think it came out OK. 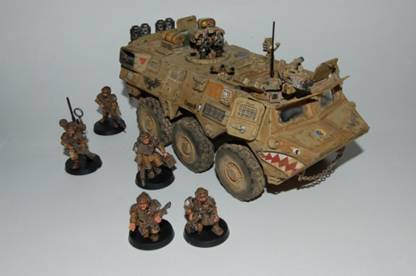 As with everything in life it is a learning curve and having been doing models again for about a year after a long layoff, I still have plenty to learn, and, yes, Dale, one day I might just buy that airbrush!

I stopped before I got carried away with the dusting, I didn’t want to smother the legible decals. The only problem with these pigments is they come off in your hands so until I get the case done the VAB will live in a box! Coming out only for a guest appearance at the competition night.

For my next military project, I will (if I remember) take pictures of every stage of the model.

As for what’s next – I’m awaiting inspiration…