This is the second vehicle for my Operation Barbarossa diorama. The first being my Stug B.

Early in the war the Stug batteries were followed into combat by specialist munitions carriers (munition schlepper). These were converted from sd.kfz 250 half-tracks. They had a slopping back, which gave the armour better ballistic qualities but reduced space. A trailer was towed to make up for this lack of space.

Tamiya released Rommel’s sd.kfz 250/1 half-track a year or so ago and shortly after Black Dog released a conversion for the 252 – this suited my needs perfectly.

I got the Tamiya kit for Xmas (cheers Sis). I ordered the conversion after Xmas. Whilst waiting for it to arrive I started on the bottom half of the half-track. As with the Stug it has a metal base, albeit a very small one.

The build went very smoothly and as I hadn’t ordered any etch for it, this was one of my quicker builds. With the bottom half of the half-track completed the conversion kit arrived. The detailing of the resin is great, with very little flash and the parts were easily trimmed off the casting blocks. I built the trailer first – this went smoothly, until I glued the wheel mounts on, upside-down ; bugger, I must read the instructions better. Luckily this left the wheels in the correct place but I wouldn’t be able to add the wire as per the instructions, not much of a problem as this will be hidden by the mudguards. The instructions aren’t up to Tamiya’s standards; they are very basic, but legible and photos from the internet helped no end. You have to drill tiny holes in the top of the trailer and form your own handles out of wire to complete it. 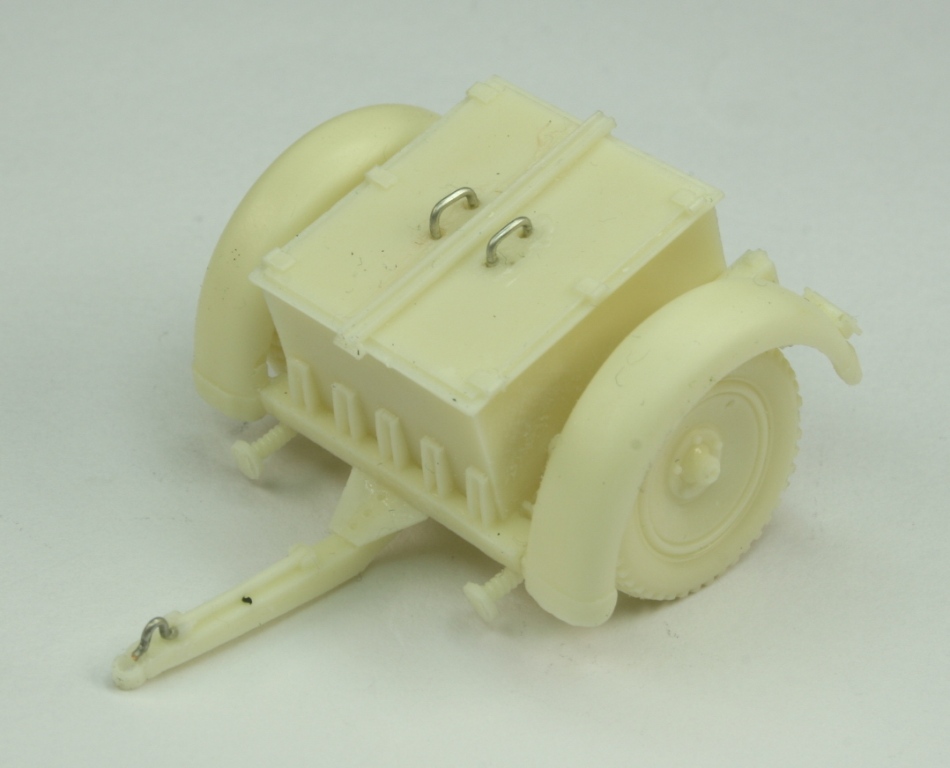 Once done it was onto the half-track.

First things first, using the supplied guide you have to cut off a section of the hull on each side. This gives you the correct angle to mount the top of the hull. This was going to be fitted last as I wanted all the hatches open to show off the interior. I fitted the mudguards and tools with an added canvas roll from my spares collection and the vehicle was nearly ready. I left off the fragile parts until I had the two halves together in case I broke anything. The interior is supplied in the conversion set, which with added hatch handles look basic but ok. I added a few extras including helmets, rucksack and an oilcan. It was then I had a brainwave, in amongst my etch kits for the 1/72 sd.kfz 234 armoured cars were a set of mesh seat backs. 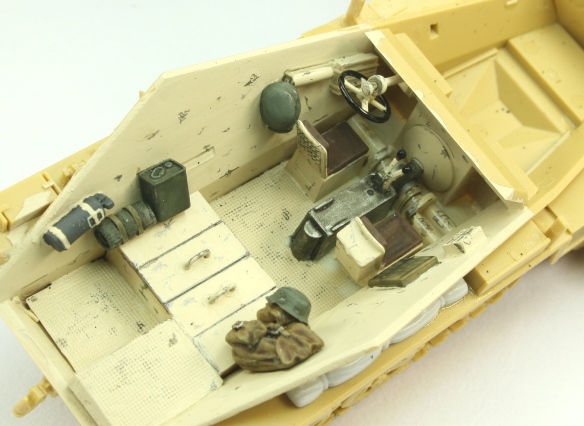 Looking through the rear hatch you can see the back of the drivers seat and I thought this would be perfect. I just had to find it. Half an hour of going through my spares boxes I finally found it, not in the box where it should have been but there you go. I then put it somewhere safe and got on with something else – lunch I think. When I came to back to the kit I couldn’t find the etch anywhere, my flat is tiny so it couldn’t have got far. A couple of hours later I finally found it, back in the box it was found in originally, I have no idea how…. one of those modelling mysteries. Once in place it looked good and considering the scale differences it fitted perfectly. I painted the interior using German interior white (cream), painted the seat pads red-brown and the steering wheel and levers black. I then simulated scratches on the surfaces using a pencil to give it a `lived in’ look, with hobnailed boots on a cream interior it won’t be immaculate for long.

With the interior done it was over to Paul to take some piccies. Once I’d masked off the hatches it was time to glue it together. The fit left some gaps, possibly from my cutting skills, or lack of. These were filled with Mr. Surfacer and very carefully (as I’d fitted all the tools) the edges were rubbed down using 600grit paper. Once I was happy with this, I fitted all the fragile bits I’d left off, although I’d lost the taillights somewhere, rats! I salvaged the left hand from my Stug G and with an etch bracket fitted it to the rear mudguard. The right hand one was lost forever, with no spares, double rats. So I fitted a helmet over the bracket where it should have been and it looks ok.

After the halftrack assembly was finished it was on the painting. This would essentially be the same as the Stug B – a nice shade of panzer grey.

The halftrack and trailer were sprayed with grey primer and the joins on the halftrack rubbed down, until I was happy with them. Primer shows up any casting lines or badly filled surfaces. It was then given another coat of primer. Once dry and I was happy they received a coat of Tamiya panzer grey spray paint. This went well until the trailer hitch loop snapped and the whole thing hit the floor, bugger. This happened because the resin was a bit thin and I used it to loop wire through to hold whilst spraying, I won’t be repeating that mistake! After removing the floor fluff and rubbing it down I resprayed it and left it to dry with the halftrack.

Washes were next, after my previous mistake with the Stug I did not give these a coat of varnish and moved straight to the MIG dark wash. This went on a lot better without the varnish! After a couple of coats I was fairly happy with the result, perhaps a bit too streaky, more practice and another thing to learn methinks. I gave them a coat of matt cote to seal this in and gave it a quick dry brush with various lighter shades of panzer grey to highlight the raised surfaces.

The tyres and rubber parts on the road wheels and tracks were painted black and the tracks were painted a mix of rust, panzer grey and black, this came out very dark and were not as good as the Stug tracks but I’ve seen tracks in so many colours and shades it is impossible to say what’s right or wrong. I gave them a dark wash and a light dry brush of gunmetal to highlight the detail.

Onto the decals, the conversion comes with none so it was off to the spare decal collection. The ones that come with the kit are unique to Rommel’s halftrack so were unusable. I used the Stug batterie 667 ones to match the Stug, some halftracks did this, most didn’t but with no photos of any 667 batterie vehicles who knows? The crosses and the number plates were taken from various 1/48 spares sheets. These were given a light coat of the dark wash to dull them down and a coat of matt cote to seal them in.