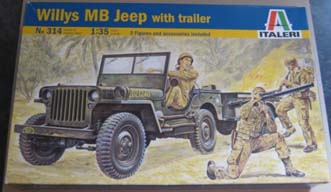 The 1/35th scale Italeri Willy’s MB Jeep with Trailer was only £10 Inc p&p from www.netmerchants.co.uk.

Moulded in Olive green plastic, the 95 pieces, plus transparent parts are fairly flash free. The jeep itself is a late production one, as the decal sheet has four different sets of markings to choose from – from June 1944 to February 1945. The three man crew supplied with the kit – a driver and two infantrymen, need to be silently placed in the bin as these are very badly moulded and look like something from the 1960’s, compared with the very highly detailed figures you can buy today.

The M18 57mm recoilless rifle supplied with the kit is worth building. I will place this in the trailer along with the other spare parts that Russ gave me – “cheers Russ” – backpacks, ammunition boxes, etc.

To replace the crew I bought the US Jeep crew and MP set from MiniArt (no. 35047) for £7.75 from Just Add Imagination. The set consists of three crewmen and two MPs with a selection of small arms. They are very highly detailed, even showing moulded on sergeant stripes on the upper arms. With the driver as a base, I used the left leg from the other seated figure as a replacement, so as to appear the driver is resting with his foot up on the side of the jeep. His right hand is moulded to hold the gear stick but I needed him to be more relaxed as they are stationary. I cut a small wedge out of his right arm and slightly repositioned it so now his hand is resting on his knee. The other hand I added a cigar made from stretched sprue and I altered the angle of his head slightly too. Humbrol filler was used for slight imperfections, then Humbrol light grey (145) painted over this to seal the filler.

Onto the Jeep and the trailer. Consisting of 74 parts it all went together reasonably well. The only filler needed was on the trailer chassis where the ejector marks were showing by the towing hitch. The body of the Jeep also needed some filer and sanding with fine wet & dry where the sides meet the bonnet panel, just where the windscreen hinges forwards. The canvas tilt cover looked slightly wrong so after studying several reference photographs I added two pieces of plasticard, one each side, where the top meets the back, to give it a more curved shape to the canvas tilt.

The transparent parts that are supplied for the windscreen are much too thick and would represent 4inch thick bullet proof glass in this scale! I cut out new ones from acetate sheet using the old ones as templates. Locating them in the windscreen and tilt with superglue.

Strangely the assembled model on the side of the box shows the windscreen wipers in the wrong position, located at the bottom of the windscreen as on modern cars! 1940s Jeep wiper hung downwards from the top of the windscreen. New wipers will be made from off-cuts of brass etch.

The only other modification I did to the jeep was to drill a small 0.7mm hole in the front bumper. This represents the starting handle hole and is slightly offset to the centre line of the radiator grill, to the right, face on. The single round mirror located on the driver’s side was covered with aluminium foil and stuck down with PVA glue to represent the curved reflective lens of the original.

Looking at the exhaust it just did not sit correctly. It was too high. So I added two smaller pieces of plasticard to make it lower, along the line of the jeep body. Also with a very small drill I drilled out the end of the exhaust.

There is an engine block in the kit consisting of six pieces. But with the bonnet lid firmly glued down I did not want to include it, as it cannot be seen anyway. But if you bought one of the many Jeep aftermarket photo-etch sets, it might be worth super-detailing it.

A homemade towrope will be added along with the shovel and axe that are located on the left side of the jeep.

The next stage is to prime the whole model then coat it in light Humbrol olive drab (86), and apply the decals.

All went well with the construction, so a coat of Humbrol primer was spayed over the jeep and trailer. This also shows up any missed blemishes or unsightly joints, luckily enough there weren’t any. Two coats of Humbrol light olive drab (no.86) were sprayed over this. When fully dry the tyres were picked out in Humbrol satin black (no.85). I usually use a very dark grey for the tyres; something near a dark panzer grey but the satin black gives a realistic sheen to the tyres. Also the Jeep is supposed to be only 6 months old as it was brand new for D-Day. That’s my story and I’m sticking to it!

The decals went on well; I chose the 101st Airborne Division June 1944, as supplied with the kit. Some slight silvering did occur but that was fixed with a thinned coat of Matt Coat. Why can’t decal manufacturers make matt decals? Answers on a postcard please, as I have often wondered this! 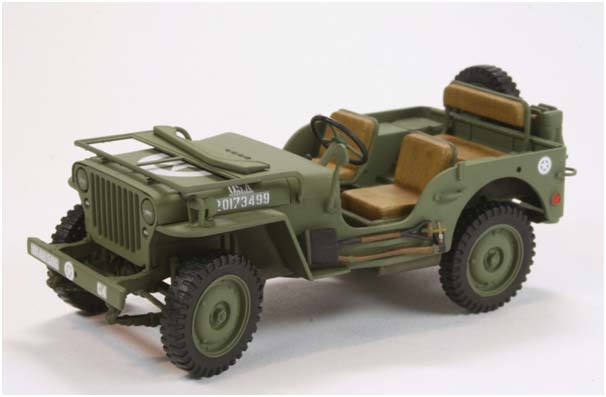 The transparent lights had an aluminium foil backing applied to them with pva glue. Once fixed to the vehicle with superglue a blackout mask was then painted across the headlight lenses.

The canvas tilt and seat covers were painted in Humbrol light tan (no.93) and given a wash of GW Gryphonne Sepia ink. Other small details were picked out in Humbrol matt black – dashboard details, steering wheel, bonnet rubbers, etc.

For the wooden handles of the shovel and axe that are located on the left hand side of the jeep I mixed up a combination of black, red and light brown, to achieve the desired wood grain effect.

The exhaust received my own mix of rust colour and a wash of GW Devlan Mud, as did the underside of the Jeep and trailer.

I was very pleased with the finished result of the kit. It makes a well detailed model with very few modifications. Overall the model has turned out well and it would make a very good centrepiece on its own – preferably displayed on a small base along with a figure to give it scale.

The driver for the Jeep will be painted along with the other figures, as the Jeep and trailer are just part of a larger diorama. More details on that will follow soon. 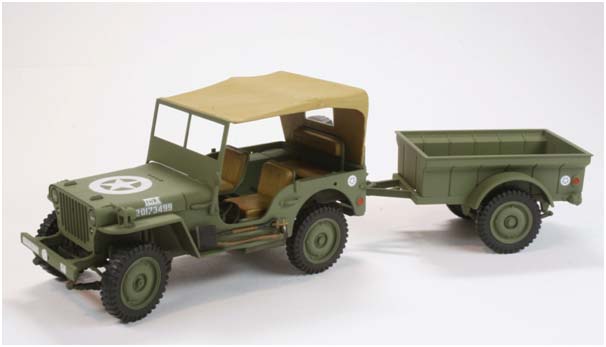 One Reply to “Willy’s Jeep”