Just a quick write up as I am now 3 months+ into this model.

I started the model by building the base first, and I see now why it is generally left till later. But on the plus side, having the model firmly attached to the base has been very useful.

First task on the list was to remove the bottom of the bottom of the ship so it will fit on the base. I took some of the larger pieces of sprue and glued them across the width of the hull to give some strength while I slice and dice. I used a combination of Dremel and hacksaw to remove the bottom. Everything was going well till I snapped two of the 5 braces. I did not notice how easily the hull could twist till I tried to fit the three piece deck. 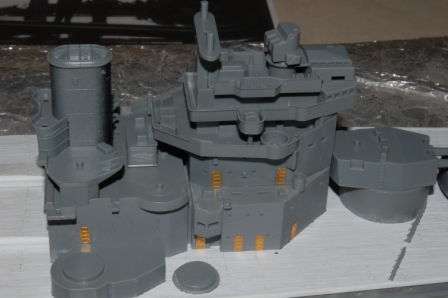 Onwards to the base. I used a piece of MDF first, then applied a lot of wall filler to build up the rolling sea. What is actually annoying is that by doing the sea to scale, you hardly notice it. Unless you want the sea to be choppy but this is a nice sunny morning in the Mediterranean. On top of the filler went a sheet of crumpled up tin foil. This didn’t come out to bad, but thanks to me resting on it all the time, I will probably have to pull it off and reapply it later.

And so back the ship. In went the three pieces of the deck, Thanks to my braces snapping and not paying enough attention to this, a lot of work came in to repair the twist of the hull. But the joys of thick superglue and brute force, this was rectified.

At this point, I came to the conclusion that the raised deck lines, (pretty much panel lines) just looked rubbish and I could do better. So, I sanded the decking flat, removing all the other detail that was also on the deck. Turns out that was also a good move as the detail was completely wrong and you could not tell a hatch from an air vent. I intend to do better so I experimented with ways I could do decking. First was the scoring of lines to try reassemble a planked deck. this was fine till the third score and it did not line up with the other lines. So I came up with a tool using 10 scalpel blades. This seemed to work, but then I could not keep the pressure consistent and the 7th blade did not score. Arg, more disaster. So then, I asked the internet as to how they would do this. It replied with a pre cut wooden deck, from Hobbylink Japan with a long backorder, at a whopping 80 euro. OUCH, I thought this is way to expensive then I noticed an article from someone who built a Bismarck and did it with 1.5 thousand wooden planks. And hey presto, there was the idea for me to individually plank this deck. How hard can this be I thought. So I then went and found some microstrip from a company called Slaters. This came in a thickness of 0.5mm which was fine, so I ordered a whole bunch. 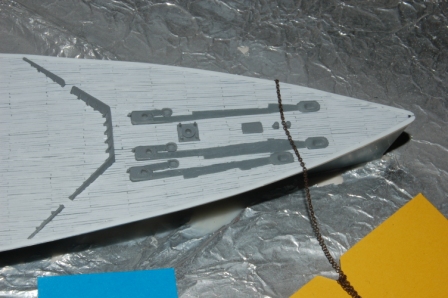 Then, for the next two months, I was laying planks down. Each plank is individually superglued to the deck after it is held in place with a tiny strip of Tamiya masking tape. I tried using different plastic glues, but I soon learnt that the plastic glues melt the planks together, and as such defeating the whole point of putting individual planks down. So back to Superglue. I generally either used thin or normal superglue. Thin is great for when you want to use capillary action to suck the glue under the plank. The only problem is that you cant really see how much glue has gone down, so I tended to not believe I had enough glue and then use more and more. This leads to disaster and another 2 nights repairing the damage. But once I got the hang of it, it worked well in those places which were hard to get the needle to the base of the plank. Superglue doe not have a long life before its properties change. This is a complete nuisance as I went through 6 – 8 bottles of superglue. I pour a drop or two of superglue into an empty pill blister strip. Then I use a needle to apply the glue from the empty pill strip to the plank. 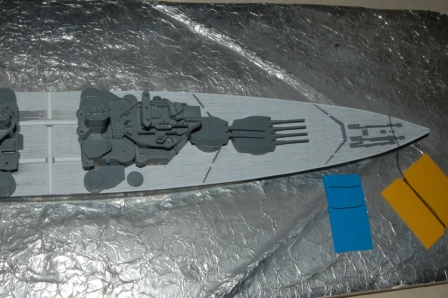 So once the plank laying had got going, I needed to get the base structures in place so that I could work the planks around them. This wasn’t so bad except I again decided to change the default kit. The Hanger bay was my next victim. I wanted one of the two hanger bays to be open for the walrus to go into. This required the door to be cut away, and then the internal walls to be scratch built. ,this actually went rather well.

Anyway, after laying 4 -5 thousand planks. The planking was complete and I could feel smug that I was the only individual insane enough to go this far. 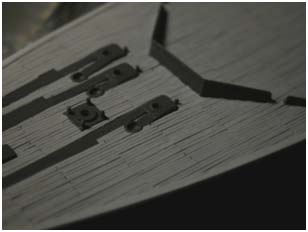 Next on the list was to add a rim to the hull of the ship to separate the planking from the metal structure. I added L shaped plastic rod around the hull. When I looked at it after supergluing it to the deck, I realised this looked so overscale and had to do something about it. Out came the scalpel and many hours later, I was almost back to where I started, minus a few planks that came off with it.

Because the ship is fiddly to handle while being on the base, I decided to rip it off. This is where I regret using so much glue. Wow this was a difficult task. After a little cleaning up, the damage wasn’t to bad. Now I could now get the angles I wanted on the desk to glue the tiny 0.5 mm strip around the edge without needing to much tape to hold it in place.

This is when I started to hear cracking noises while handling the ship. The ship was flexing, to solve this, I cut off a metal tube, inserted it into the ship and bolted it down. Presto, one stiff ship. 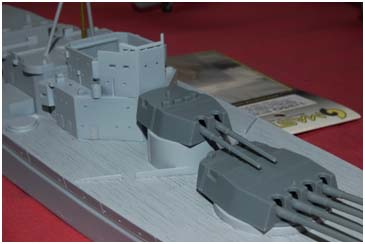 On looking at reference photo’s yet again, I noticed how the plate lines stick out quite noticeably. Out came the scriber and a line was scribed. But this looked wrong so I stretched some sprue, and placed it into the scribed groove and glued it down. This worked and looks like a fine raised panel line.

After this, I scratchbuilt some vents and pipes to go around the main buildings on the deck. While I was gluing them, I added some vertical ladders. I even built a few fire hose reels, but they won’t be attached till later.

Next I upgraded the 5.25 guns with more detail, this involved adding vents, hatches, doors and ladders .

Next on the problem list were the masts. With my new found liking to streched sprue, I intend to rig this ship, looking at how many cables there are, the masts are going to require some strength.  I decided to scratch build the masks from brass pipe, and needles. My Dremel was very useful here. I noticed at this point, that the plastic masts are wrong, and after getting enough angles and semi closer shots, I managed to work out the majority of differences and begin scratchbuilding them. E.g., on the main mast I noticed two main problems, the first being that the lower section has three support pipes which were missing. The other was the main horizontal piece that the majority of radar/com lines hook onto is midway down on the mask, this needs to be raised to just below the crows nest.

And so this lead to the next problem. When to paint and when to glue?. The masts enter the structures at an angle and need to be very strong requiring  a strong bond. As I do not want to be drilling and supergluing after the surface is painted, they will need to be done now. But then the masts are going to be in the way when it comes to masking and painting. 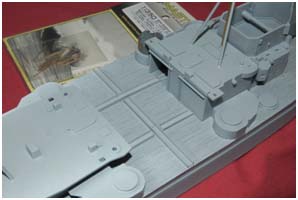 In the end, I glued them in place and removed a small building near the main mast. This will allow me to paint and mask off this area. As for the foremast, I have decided on a two stage approach, half of it will be glued for now, the other half will come later. This required a tiny jig to be made to ensure that the pieces I am gluing down, will be in the correct spot for when I later place the other parts. I also noticed at this time that I need to scratch build the entire radar room as the kit is missing this ( it is on all 5 ships of this class!). 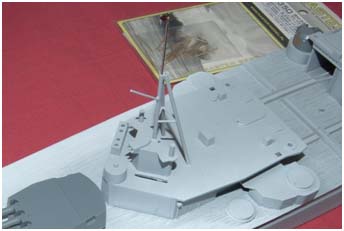 Next on the list is to give a coat of primer to the ship and see what needs to be cleaned up,

I have melted the forward and mid decking to match the rear using thinners. Risky process but took it slowly and doing it multiple times till the look was about right.

I then decided to remove the layers of primer I have put on the deck and side of the ship, this will then enable me to use plastic glue to attach more parts that should not hinder masking off later but would benefit from being on the ship now. For this I used IPA (isopropyl alcohol) in a cat litter tray with a toothbrush to apply the solution to where I want it and then gently rubbing away at the paint till it dissolved away. This process took almost 2 hours. Next time I need a mask as the fumes are not pleasant but the result was not to bad at all. This solution is not as vicious as thinners and as such does not melt the plastic, just my head.

Scratch built the 10 main bitt’s (A vertical post extending above the deck for securing mooring lines) by using some 1mm rod and then placing round copper plates on top of the rod. These came from a circuit board I had. I find circuit boards useful for bits of small copper squares, circles and rectangles. I predrilled the deck with a 1.1mm drill to ensure the bitts went in the correct places and so they would not move around while being glued in place. 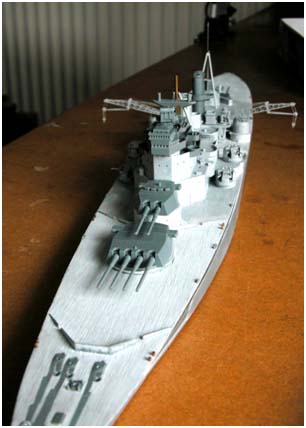 Next on the list was the armour plate weld lines. These are noticeable from close up shots so I used the finest stretched sprue I could make to do this. This task took far longer than I expected lasting around two 8 hour sessions. 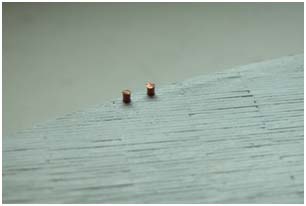 Moving onwards, the fairleads were then added to the hull. Again I noticed from the pictures that the larger fairleads all overlap the side of the ship. Woo hoo, back to scratch building to create the lip. First, I looked at the brass fairleads I have around and for the first time, the plastic parts were superior. After this realisation, I scratch built a complete fairlead and it looked reasonably good. 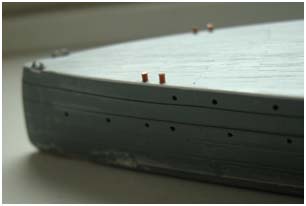 But in the end, I decided to use the original parts but scratch build the lip underneath them as they overhang the side of the deck.