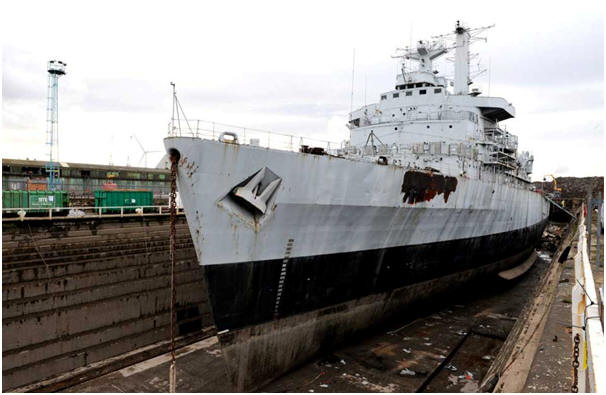 I promised Tony I would write up something about this build as it’s certainly been a learning experience. Already, the term “it’s an Airfix kit” is now burned into my mind as, you will need to rebuild everything as its going to be wrong.

I purchased this kit at the Yeovilton show not to long ago and have been working hard on it ever since.

I have set myself two goals with this project
1. To learn the basics of working with photo etch
2. The basics of weathering.

I intend to model the Fearless as she appears in the photo above – just about to be scrapped! At the last meeting, I received plenty of feedback on how to achieve the rusty looks I seek and after raiding Russell’s etch collection, have already made some good progress.

Anyway, onto the Kit. 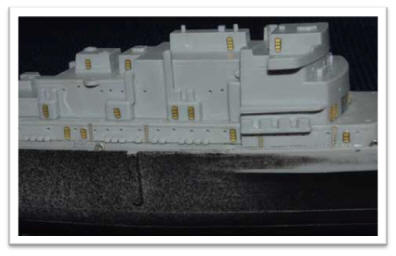 This kit was made in the early 60’s and as such….. is horrid, well compared to the modern day Tamiya kits I have recently built. On the plus side, this has driven me to research the topic more in depth. After comparing photos of the ship to the kit build instructions, I have already performed many alterations to the little detail that included in the kit. It also helped when I slipped and poured superglue over the entire bow of the ship and had to plane it flat.

So then… I have split the work into smaller chunks.

Oh, during the scratch building, I assembled a CAT (Digger type thingy) to the correct scale for this model. I am not sure if I intend to use it yet or not.
Next on the to do listOn the main structure, I need to add all the inclined walkway/ladders. This will be the task of the etch bender that I hope will be arriving tomorrow. From the little research I did, there are two main competitors for the bending tool on the market.
The Etch Mate 3C and “The Bug” or known as the hold and fold. Both cost £35 and each seem to have their advantages. The etchmate is reviewed to be better on large pieces of Etch whereas the later is better on the finer detail. I opted for “The Bug”. Anyway, time is ticking and the model is not building itself. 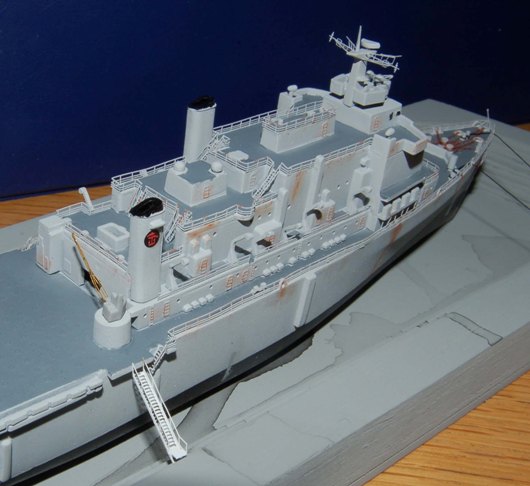 And yet another month has past and the club competition draws ever near. On the positive side, it looks like everything is mostly on track as far as time is concerned. With 4 days to go, the majority of the build is complete.
Continuing from where we left off last time, the main structure was complete with the etch doors and ladders glued in place.
The fun and games really began when I started on the inclined walkways and railings. Using my new etch tool, the tiny hold and fold, otherwise known as “the bug”, the railings were bent into shape. These were then glued to the ship using a needle dipped in superglue. This is when I learnt a valuable lesson. Not only does fresh superglue dry fast, but breathing on superglue helps it set even faster. Nothing like glueing the railing piece to the needle instead of the ship to raise the blood pressure!

Lesson number two. You always need a third hand. Creating jigs or using clamping tools may take more time, but it helps a lot. e.g. by using cocktail stick, with two V cuts placed in the correct place, you can hold tiny bits of etch in place to give you two hands free to glue them. With this new stability, I was able to glue three very tiny pieces together with minimum glue which kept it very tidy. Another example was creating a base to hold the ship. A piece of cardboard and some off cuts of wood glued together. This kept the ship steady while working on it.

Anyway. about half my time was spent creating jigs to hold parts in the place, the other half was gluing them together.
Now that 95% of all the etch was glued in place, including the two masts that will remain separate from the ship till the last moment. I began the painting.
I was struck with a problem straight away. As with most military ships, they tend to have two colours, one from the top looking down, and the second from the sides. This would require a lot of masking and with all the etch in place which took considerable amounts of time to fix, I did not want to damage anything. 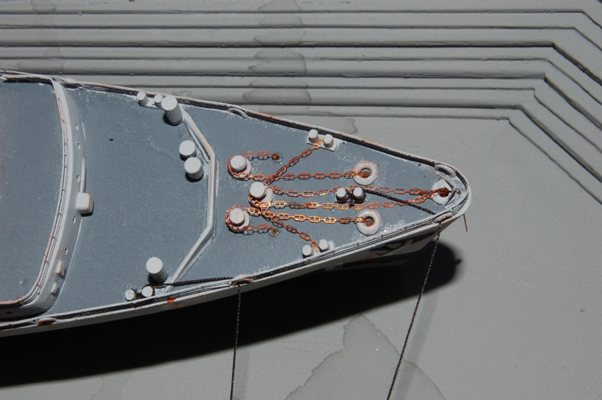 his is where I need to thank Richard for showing me the correct way to mask using masking tape. I was not aware that you can use a sharp blade to cut through the tape without damaging the paint below it, and even if I did, this tiny groove would actually help. The 90 degree bends on the ship were really useful for slicing through the tape and then using my blunt tipped tweezers, I gently pressed the tape to the surface of the ship to ensure no seepage of paint.

18 working hours later, the masking was complete and using my trusty airbrush, the second colour of paint was applied. Yet more time passed while I removed all the masking as carefully as possible and hey presto, a two tone paint job and no detail etch damaged in the process.

The waterline was then masked and painted. By looking at the photo’s of the ship being scrapped in the dry-dock, the bottom of the ship was not red, but a mixture of black and bare metal. This is due to the anti rust paint having been stripped off sometime prior. By using a black ink wash, I simulated this effect. 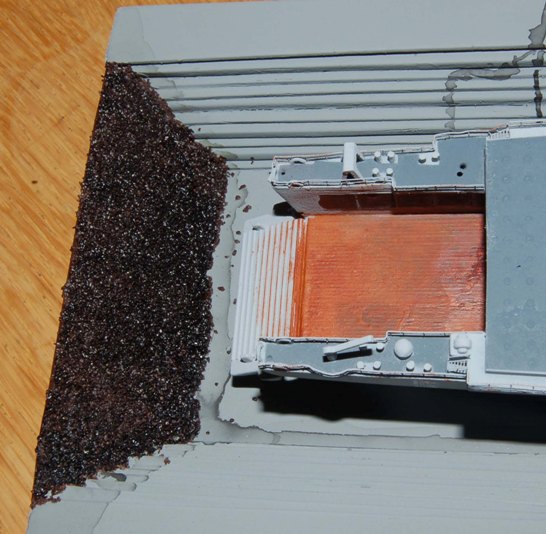 Onto the rust: Due to the tiny scale of the ship, it would be way too easy to go overboard with the rust. The further away you look at the real ship, the more perfect the paint job looks, yet when you get very close, the thing is covered in rust. I tried to emulate this and so, if you look really close, there is a lot of rust, yet from a foot away, only the major rust streaks are visible. Well, apart from the rear dry dock in the ship as that was rusted to heck. 8 years sat in Portsmouth Harbour tied to its sister ship HMS Intrepid collecting water contributed to that.

And with the rust work complete the anchor chains where then applied to the ship. Yet another fiddly job that consumed many hours without me even realising it. I had a horrid time getting the chain to bend just right and the poor flag mast on the front of the ship was bent many times in the process. I was terrified that it might snap.

The ship was then glued to its base, and the tow ropes were applied as per another photo. I was surprised just how black they were in the photo. I assumed they would be more rusted or well used. The rear of the base was created using games workshops grass flock, and then painted brown and blackish to transform it into earth. The embankment walkway and the two cranes were glued in place.

Next on the list is the marking on the rear deck for the helicopters to land on. I am amazed as to how pristine this deck is on the real ship at this time, I suspect the deck was still in use even in its decommissioned state. Once this is complete, on go the masts and Ta da, One about to be scrapped HMS Fearless in a dry dock in Belgium.
I have actually enjoyed building this Airfix kit, but I will probably still never get round to finishing off the Airfix Sunderland kit as it scares me.

One Reply to “HMS Fearless”