Without doubt this kit has provided me with my most frustrating, challenging and downright unpleasant modelling experience since I have got back into hobby. The reasons behind that statement are manifold as I will try to explain in this article. The most obvious failure was my inexperience in building ship kits (this was my first)

The idea of course was to produce an entry in this month’s Airfix competition and with four months to complete the project it didn’t seem to much of a stretch. I purchased this kit for the grand sum of £5 on eBay not bad for a kit that normally retails at £25. The reason it was so cheap was that it had already been started, the engine sponsons has been glued together and the bow insert glued in place (badly).

The first job was to sort out the bow which required a considerable amount of squadron putty and a lot of elbow grease applied via sanding sticks[1]. Once happy the hull was given a couple of coats of Halford’s grey plastic primer with a light micromesh rub down between coats.[2]

Paint was supplied with the kit and my original intension was to make a true “out of the box” build using the supplied paint. To that end I loaded up my airbrush with the supplied hull red thinned with isopropyl alcohol and sprayed the hull below the water line. The paint proved to be a real nightmare clogging my airbrush after a few seconds, cleaning it out of my airbrush was a night mare. I persisted and moved onto the main hull colour again using the supplied paint which this time had to be mixed from two colours. After I had applied the colour with the same issues as the red with my airbrush (I tried various thinners without success) I was unhappy with the colour which was a medium grey [3]. I have seen the QM2 on many occasions as it generally docks opposite my parent’s house in Southampton and the hull looks almost black from a distance.

Consequently I added a good deal of black to the mix and resprayed to produce a colour I was much happier with.

I now made my big mistake driven by my inexperience with ships and being spoilt by the quality of the kits I have been building recently by Tamiya and Eduard – this was an Airfix kit for God sake and I forgot!

The ship super structure is white and I thought it would be a good idea to spray all the parts before assembly to reduce the need for complex masking of the decks. Consequently a sprayed the super structure Tamiya X-2 (gloss white) having given up on the supplied paints. I was lazy and decided not to prime the superstructure (another mistake) the resultant paint finish was far from ideal.

I started of building the super structure to the hull [4] and soon found out the fit was not to special [5]. The gaps had to be filled and sanded which did nothing for the quality of the paint work.

I masked the main decks and painted them a shade that was close to the supplied colour. When dry it looked diarrhoea yellow [6].

I made a lighter mix after referring to photos I’d found on the internet and resprayed. I then proceeded to fit the decks in place. At this point I thought it would be a good idea to give the decks a wash to bring out the planking , so I smothered one of the rear sun decks in pro modellers – ahhh another mistake it looked as if the ship had been in service 70 years[7]. I resprayed it, but because the undercoat was different the deck colour did not match the other decks. I was starting to get decidedly hacked off, only the approaching competition stopped the kit from ending in the bin.

I then set about applying the numerous decals to the side structures that represented the cabins [8]. This was a couple of nights work but once done I got a feel of what the ship may look like when done so I felt a lot better.

It didn’t take long before my illusions were shattered as I began to encounter fit issues as I glued the super structure in place. The gaps were huge, particularly at the side of the bridge [9] and the rear sundeck [10] which required copious amounts of filler. The continued rubbing down was disturbing the surrounding paint which was looking worse and worse. Finally the superstructure was finished and the funnel painted (twice as the original colour was far to bright).

The mast was rigged with nylon thread and other ancil

lary parts added. I then turned my attention to the life boats. At this stage I was thoroughly hacked off so it was a case of completing this laborious job as quick as possible. I can’t say I am happy with the lifeboats but their completion brought me one step closer to finishing this trial.

I gave the hull and decks a couple of coats of semi gloss varnish, during this exercise I managed to put a finger print in the middle of the main deck (I think I must have had thinner on my hands). This was a real problem as I had no “deck mix” left and the chances of matching the colour didn’t look good. I had a go at by applying some very thin coats found that it didn’t look too bad.

The final major task was to paint the glazed deck surrounds. This consisted of four very thin transparent pieces with 20 to 30 windows in each, this would be a masking nightmare. Fortunately Richard Stewart suggested that I use thin strips of white decal sheet rather than paint, which I managed over several nights, and was actual quite pleased with the result.

The remaining decals were added along with various breakable parts and the pools filled (with Klear). Finally after mainly frustrating hours the bloody thing was completed.

Looking at the final result, the model hasn’t turned out too bad, a year ago I would have been delighted but I do feel it is a step back in quality compared to kits I have completed recently.
Note to myself: In future do not publish how rubbish your model is until after the competition! 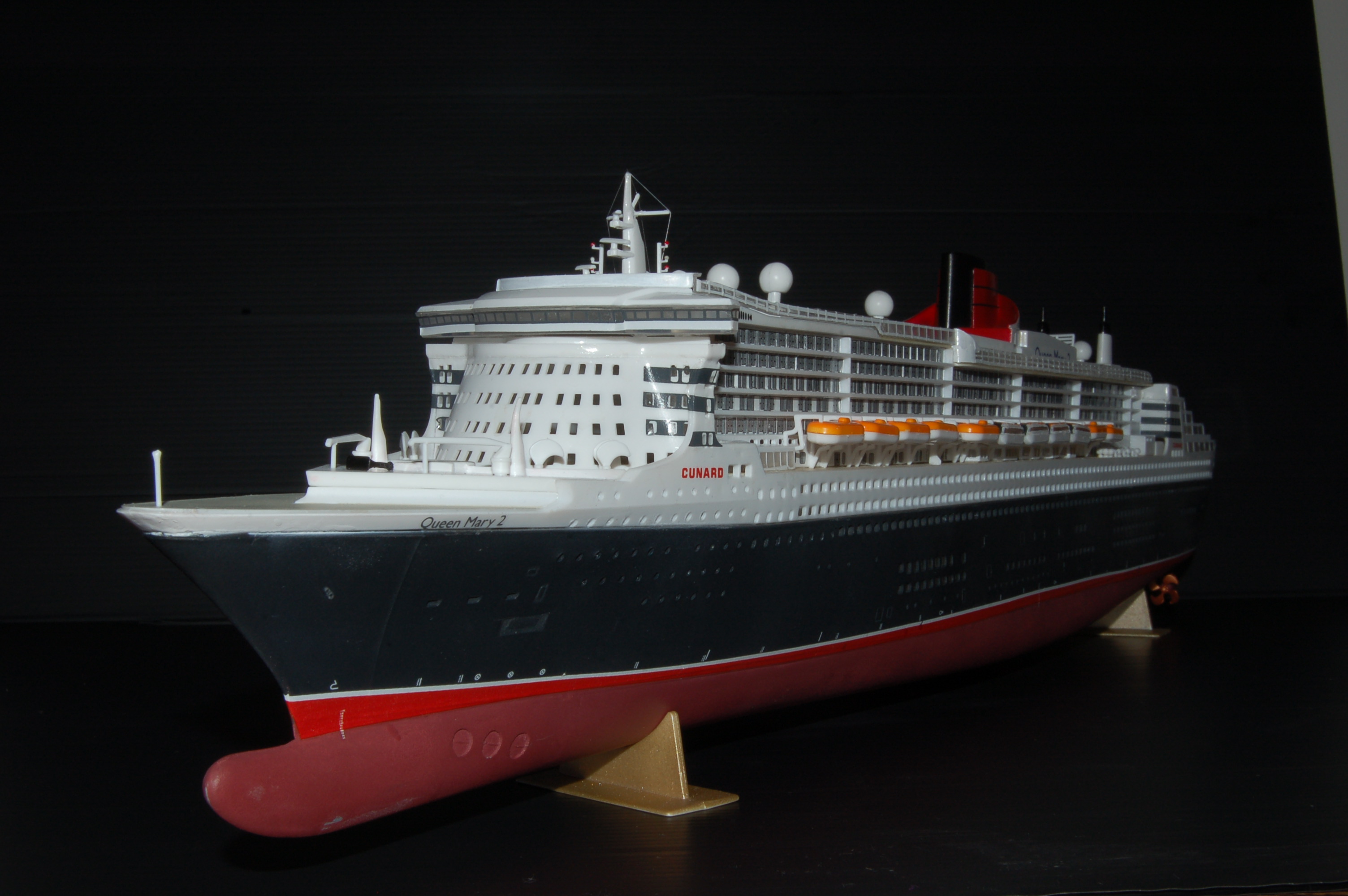