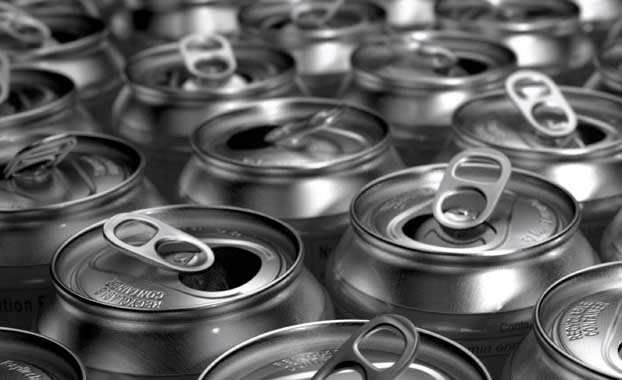 I use aluminium from a soda can quite frequently during model builds. It does, however, have a polymer coating on the inside face and paint on the outside. You need to decide whether to remove these coatings for the parts you are going to make.

I left the coating on when I made this cockpit for a Curtiss Hawk biplane. All I had to do when painting was to airbrush Tamiya “smoke” in the shaded regions.

You can see that the material is easy to fold and cut (see the slots cut out for belts in the seat for example).

I have also left the coating on when I used the material for blast screens: photos below show repairs I made after I dropped my 1/700 scale model of HMS Triumph during building and also a photo of 1/350 CV-8 USS Hornet.

If the part needs a lot of folding and gluing, or if it is likely to get some handling, then it is a good idea to remove the coating first of all. I do this either with wet & dry (grade 320 or finer) or by a fibreglass scratch pen (I do this outdoors, though, as the broken fibres can be an irritant if left around the workbench).

You can make some quite detailed parts, here is a toolbox I made up for a 1/48 aircraft diorama.

For cutting, I use an Olfa-P cutter to cut a groove and then flex the part to break it away.

Rolling a curve is done by placing the part on a rubber pad and using a roller. Hard rubber and a large roller for shallow curves, soft & deep rubber with a smaller roller for tight curves. I also use this method to remove the curve from the material when it has been cut from the can.

When it comes to painting, I either spray on a primer or (as in the case of the ship models) airbrush on enamel paint. Apply the paint as a “dusting” layer first of all to get a tooth for heavier top coats.