I am building the Shiden as a learning curve. First of all it is a Japanese aircraft and I haven’t built one of those since my teens. Next I want to do some flaky painting (so what’s new there, then!) and to try painting on the national markings (Hinomaru) rather than using decals. It also turned out to be my first use of Alclad 2 lacquer, and it is that I wanted to tell you about.

The Shiden is a Tamiya kit from the late Brian Press’s collection. It has been built pretty well straight from the box and is a good subject for surface treatment, having nicely done engraved panel lines and few awkward lumps and bumps. The only downside is that the wing assembly had to go on before painting because of a gap that needs filling in the fuselage underside. If you could do the painting with the wings and tail left off then I’m sure that is the way to go.

My attempt at flaky painting is to undercoat the model in aluminium finish so this shows through in patches of the camouflage top coat. As such, it was a useful practice for a natural metal finish (NMF) for that F-86 Sabre sitting in my “to-do” pile. 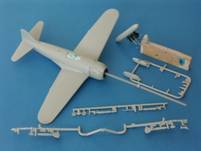 The basic airframe was assembled with all the detail bits left off. The joins were filled where needed and sanded smooth. I used up to 8000 grit micromesh (used wet) and checked the surface for any bumps or scratches left. Other details that needed NMF were similarly treated and, where practical, left in place on the sprues for painting. The undercarriage wells were painted before assembly and masked off using a roll of moistened tissue paper capped off with Tamiya tape and Blu-Tack. The cockpit was also lightly stuffed with moist tissue and a piece of micromesh teased into place to close off.

The surfaces were then airbrushed gloss black. The paint was “decanted” from a Tamiya aerosol can of TS-17 black. I used a 4″ length of large diameter drinking straw over the nozzle of the well-shaken can and sprayed paint though it into an airbrush jar. You will get 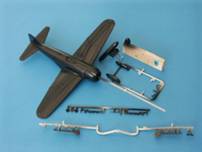 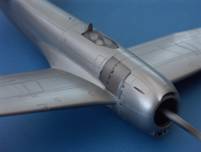 a lot of foaming from the propellant, so do it in stages. About half a standard ¾” jar should do it. Now leave the paint to de-gas propellant and don’t worry about it drying in the jar: you have plenty of time. I put a light “dusting” coat on all parts to start with, and then built up the coats finishing with a heavy, wet coat. I did this at the beginning of the day and it was ready for a bit of cleaning up with micromesh during the afternoon. I hadn’t left the paint to de-gas sufficiently and had a rough, patchy surface. However, it looked pretty good after micromeshing with 6000 grit, followed by 8000. The difficult areas are at the wing and tail roots, both due to the disturbed air flow from the airbrush and the difficulty getting into nooks and crannies with the micromesh: hence it is better to leave the wings off if you can.

Next day the underside of the airframe and many of the details were airbrushed Alclad 2 dark aluminium. I also painted a couple of panels in the hot zone behind the cowling (which has been stuck on temporarily, without an engine inside) as these were shown painted darker on the kit box art. I used quite a low pressure of 10 to 12 psi and built the colour up uniformally. No messing around decanting: just give the bottle a thorough shaking and pour some into your airbrush cup. I had to top mine up mid way through the session and this was no problem. It went on amazingly well, apart from one or two patches where the black paint had also had a problem. I waited 15 to 20 minutes before masking up the panels behind the cowls and then sprayed the top of the airframe with Alclad 2 aluminium. Again, no problems.

Later in the day I gave the panels a clean up with 8000 grit micromesh.

On day 3 I used oil paints (with no solvent) to do the panel lines. I mixed a grey from Ivory black, Paynes Grey and Zinc white. This was well brushed into the panel lines (left photo).

Wearing a polythene glove or with some Clingfilm over a finger, work the paint around to make sure the panel lines are filled (centre photo). Finally, use a cloth to wipe the surface (right photo). The oil paint darkened the surface slightly, so I’ll see whether micromesh restores it once the paint has dried. Alternatively, a coat of Johnson’s Klear before doing the panel lines may be an idea. So far at least, I am very impressed with Alclad and look forward to using it for NMF. I recommend you give it a try as well (providing you have an airbrush).

One Reply to “Alclad Metal Finish”