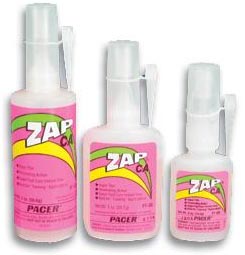 I’ve been doing a fair bit of supergluing recently and have found a useful (and blindingly obvious) way of being able to glue parts together whilst they are resting flat on a surface. I lay them onto the backing paper from Frisk film. Any glue which gets onto the paper will release easily so you can lift the parts free after the glue has set. If you don’t have Frisk film, then any backing paper from an adhesive label would probably do as well.

Quite often it is necessary to use PVA (white woodworking) glue to tack the parts together first and get the alignment right before applying the superglue. You can easily break the PVA bond and remove the cured adhesive if you make a mistake. Once the PVA has set and you are happy that everything is as it should be, apply the superglue with the cocktail stick. I trim the end of the stick to the shape of a flat screwdriver point. Put a drop of glue onto a board and dip the end of the cocktail stick into it. Transfer the glue to the parts to be bonded and you should get the right amount transfer to the joint. I use a good quality and very thin superglue for detail work (ZAP CA in the pink bottle). If the glue line is a straight line, the screwdriver shaped end is great for wiping along the join line to help the adhesive flow under capillary action.

I normally wipe the excess glue from the cocktail stick and leave the rest to dry solid. I then use quite coarse abrasive paper (180 to 220 grit) to lightly sand the point before using the stick again. I find that I have problems if I don’t do this or if I use an unmodified cocktail stick.

A way of holding parts for gluing is to use Blu-tack. Peel it off once the joint has set. Make sure not to get the superglue onto the Blu-tack, though. Having said that, I recently had to glue some parts at an awkward angle to each other (small floodlights attached to the superstructure of an aircraft carrier). I used a tiny piece of Blu-Tack to position and hold the part whilst I applied the glue. The glue flowed over and around the Blu-tack which was left in place afterwards and provided a strong joint.