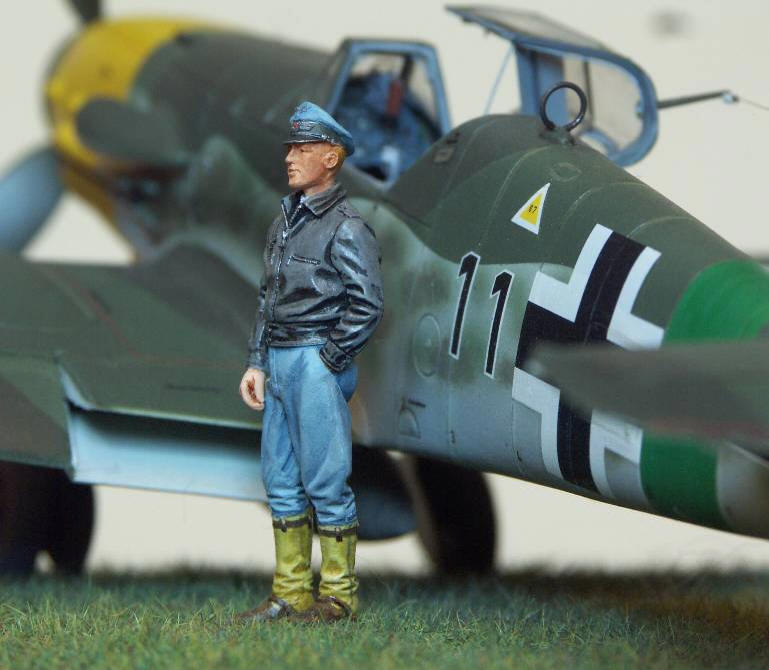 your model. Whether it is a diorama, vignette or just the single figure, these small people can be used for a multitude of purposes: 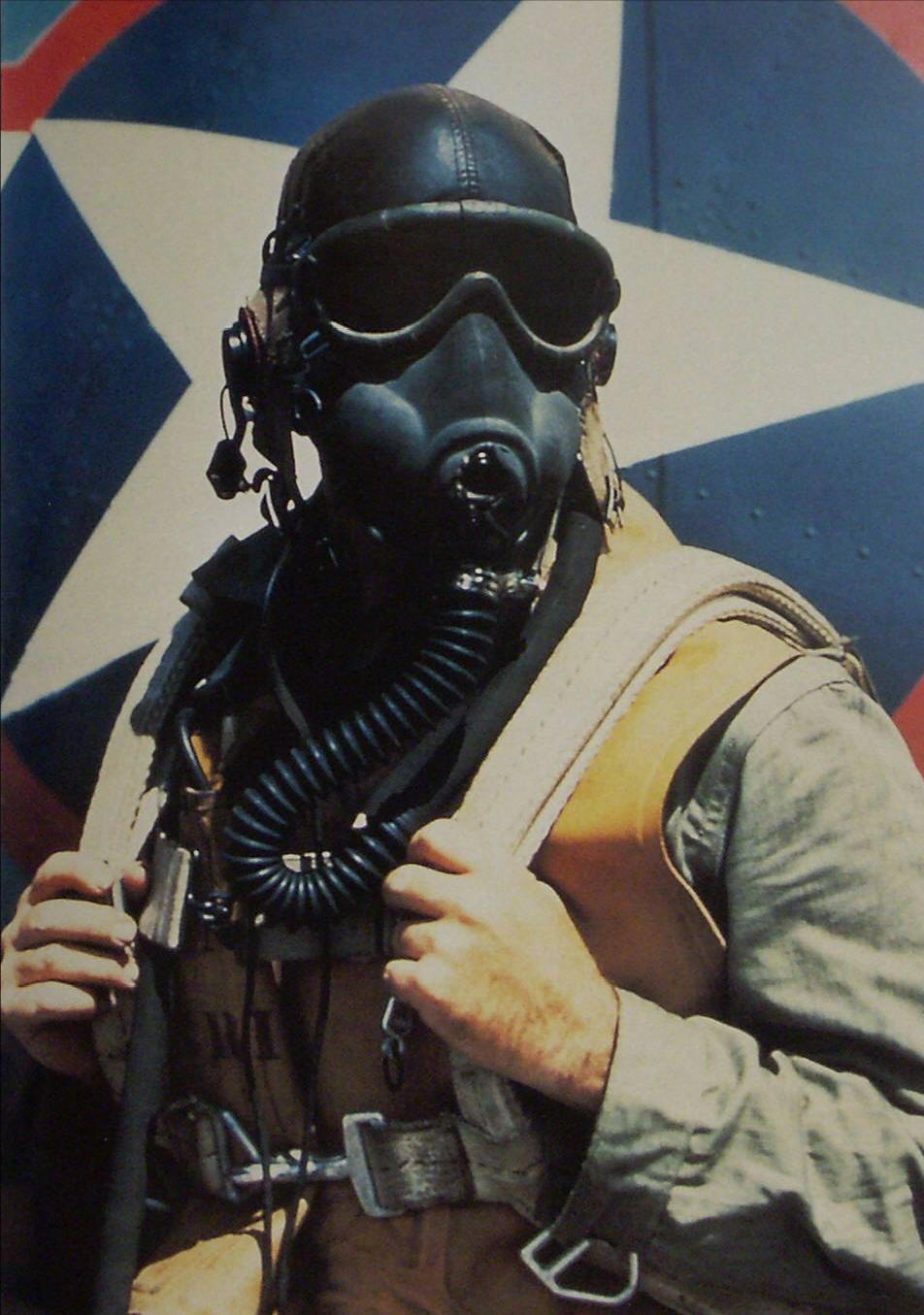 A lot of the above has been covered in a multi-part article in Update that ran from October 04, so take a look through the back issues that Tony has posted in the club web site if you want to find out more.

So despite these big benefits, many modellers shy away from painting figurines because they find them difficult to do. Yes, figurines are difficult to get right and you may also need to try out different ideas and techniques at first, but why not give it a try? I’ll try to illustrate in this article what I do so that, hopefully, you will have the urge to try the methods for yourself!

Having painted a few figures, from 3 to 200mm size, I have always said that it is easier to paint a well sculpted and cast figure than it is to do injection moulded figures that come with the kit. Having crisp edges to help you guide your paint certainly makes the task easier, and you do not have to use your paint to try and make up for any deficiencies that may be in lesser kits. The Luftwaffe officer in the opening photo and the figure below come from a top quality resin by Jaguar in 1/48 scale and give you an idea of what can be achieved.

However, I was wondering whether it was possible to get satisfactory results using the kit-supplied items so thought I would have a try. I chose a range of qualities, from the old toolings of the Monogram Devastator [2] through to Tamiya’s more recent Mustang [3] and F4U Corsair [4] offerings. All figures are 1/48 scale.

Work commenced with trimming the parts from the sprue and removing moulding flash [5]. You need to be thorough with removing mould lines as they will trap paint and make your work look untidy.

The parts are then attached to a holder for painting [6].

The multi-piece figures were now assembled and the joints made good – it is best to do this after drilling the hole for the holder, as I have broken assemblies in the past when holding them for drilling.

The Monogram figures needed the sink marks filled, and I used white Milliput for this [7].

The figures were given a wash with detergent (washing-up water) and dried before Alclad primer was applied by airbrush. Normally at this point I would follow up with an undercoat of pale grey, but on these small figures I omitted this step. I decided that I would paint the four aircrew wearing Herringbone Twill (HBT) flight suits because I have a 54mm US Marine figure to paint at a later date and, as he is wearing the same material, thought this would be helpful practice.

Photo [1] shows what I mean and this photo has some useful detail as well.

[8] shows the first stages of painting. Applying my usual technique of applying a light coloured undercoat by airbrush, Citadel Rotting Flesh was sprayed on first and then a dark green sprayed up from beneath to provide the first shade: remember that for the pilots sitting in cockpits their backs and underneath will shaded from light. Areas of flesh were hand brushed with Humbrol 61 Flesh and once this was thoroughly dried the areas were shaded and highlighted using oil paints. If you are new to oil paints then be comforted to know that the colours you need are not expensive and are available in starter kits. Experiment using burnt sienna and burnt umber mixed with white to get a range of four or so tints – the lightest being used for highlighting and the darkest for deep shade. You will be using the Humbrol flesh colour as your mid-tone, so try and get your mix to match this tone. Also, want your paint to be quite fluid, so add a touch of artist’s Linseed Oil or Liquin if the mix is too stiff.

Use a fine brush to apply the paint. This ought to be of a good quality with a nice sharp point, sable being best as many synthetic fibres tend to splay out at the tips after cleaning with white spirit. Select the tone which is just a little lighter than the Humbrol 61 and place a barely visible amount onto your brush. Apply this to the parts of the hands and face which are in the light. For the face, keep light tones down the centre and use a darker shade to each side. The scale is too small to paint close detail, so aim only to get the general shape [9]. Apply darker shade to eye sockets and lower cheeks. I like to frame the face by applying a very thin line of deep shade around the edge of the flying helmet.

The other work done at this stage was to undercoat the life vest in pale yellow. I will describe the detail painting of Monogram pilot figure [10] as all other pilots were finished in the same way. Then I will describe what was done for the remaining two figures. The flight suit was shaded with dark green oil paint. Use a deep green and add some red to it to make it darker still. You will want two or three dark shades – I didn’t use any highlight colour, but simply relied on the Rotting Flesh undercoat. Line around the life vest with the darkest tone. I usually have a second brush kept clean which is used to remove or push back any oil paint that strays from where it is supposed to go. Now continue by painting in shade to the various folds of the fabric, keeping in mind at all times the direction of light from above the figure and how it will cast onto the figure, and where the shade will be and its depth. Easy really, isn’t it? Remember, paint only the shaded areas – leave the bulk of the clothing as it is. The life vest is painted using a range of yellow shades. Take a small amount of yellow onto your palette and add some violet to it – this will darken it. You can lighten it using white oil paint. Keep doing this until you have the base colour you want. Add linseed oil or liquin to get the paint to the right fluidity. Now use it to produce darker shades (more violet, and possibly some brown) and lighter ones (add white or Naples Yellow). Once again, your yellow undercoat will form the main part of the colour, you need only add oil paints where it needs highlighting or shading. I chose to do the flying helmet in white, using photo [11] as a reference.

This actually took some time, as I couldn’t get my white undercoat to be uniform. In the end, I masked the figures using Silly Putty [12] and airbrushed them, first with light grey, then pale grey directed from above the figure, followed by a spot of pure white on the very top. The distinctive earpieces were painted in orange/red (2 tones – highlight and shade) with a dark grey centre spot added once dried. The goggle frames and straps were painted Citadel mando Khaki. A medium grey was used to shade – including the top of each lens with pure white towards the bottom area – the left reference photo shows the lenses not to be tinted. Some details, such as loops for the goggle strap were painted in, as was a metal tension adjuster. The belt was undercoated with Rotting Flesh and shaded around the pistol holster and various packs with a dull green colour. The scabbard for the K-bar knife was finished in grey and the handle of the knife using brown oil paints. The brown leather shoes worn by Navy aircrew were undercoated in pale yellow and, once dried, given a glaze of burnt sienna + burnt umber oil paints with plenty of Liquin. This is brushed all over the leather areas then, using a brush with neat oil paint, some detail of the leatherwork was added. The soles were painted neat burnt umber oil paint.

Metal buckles – and the wrist watch – were picked out in dark grey and then highlighted using a range of metallic silver tones using Printers Ink mixed with Paynes grey oil paint for shade and Iridescent White for highlighting. The centre of the watch was given a white dial. The chart table was finished in dark grey and a map painted on using the right hand reference photo as a basis. There appears to be a gadget to aid navigation built into the top of the chart table and this was also painted in (somewhat unconvincingly!). There is also a note pad in one corner. Some gold Printers Ink was mixed with burnt umber oil paint to pick out some rivet detail on the belt. A dark shade of this was also used for the communications leads over the life vest, terminating with a black jack plug with silver pin. A final touch was a spot of gloss varnish added to the goggle lenses.

The yellow top and cap of the flight deck controller [15] was treated in the same way as the life vests of the pilot figures. The trousers were painted with Kommando Khaki and shaded with oils. His glasses were picked out with the various tones of gold Printers Ink missed with burnt umber mentioned previously.

The blue shirt of the tractor driver [17] was painted and shaded first of all. Notice that I have allowed some of the shirt to show at the bottom of his back. A pale blue was used as an undercoat with the darker shade added on top The red top was hand brushed with a mix of Humbrol orange and red enamels. I had some problems with the paint and it did not dry matt. Some matt varnish was airbrushed on before continuing by shading oils. The denims were painted with a medium blue matt enamel and then shaded with Prussian blue oil paint. Extra deep blue (obtained by adding dark brown to the Prussian blue) was used for shading the pocket openings and the underside of the figure. The shoes were painted dark grey and glazed with black oil paint mixed with Liquin. So do the figures make a useful addition to your model display? I temporarily attached one figure to the Hellcat I made last year (I really must get round to finishing that one day!). I think he looks pretty good! [18] 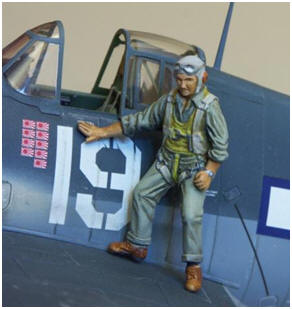 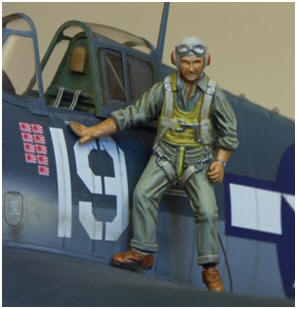 One Reply to “Painting Aircrew”